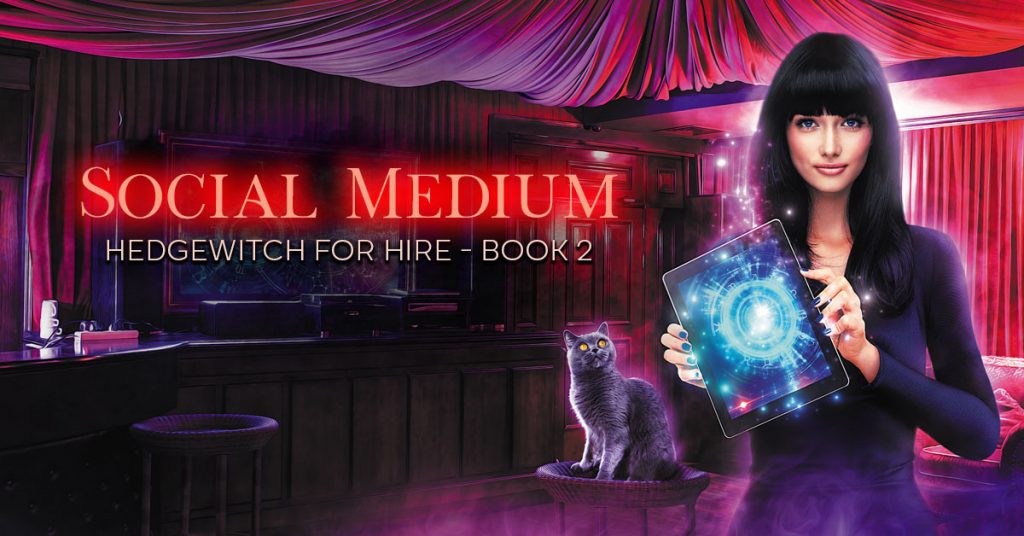 Social Medium, Book 2 in the Hedgewitch for Hire cozy mystery/paranormal romance series, comes out on Wednesday, so you know what that means! (Yes, it’s time for a sneak peek.) And because the book is on pre-order, you can get it now and have it delivered straight to your e-reader or app once it’s available — the links are below the excerpt.

A rush of welcome air-conditioned air greeted me as I opened the door to my apartment, which occupied the space directly over the store. What wasn’t quite so welcome was Archie, the cursed cat who’d become my de facto pet, sitting inside the hall and swishing his tail in irritation.

“I’m still a cat, you know,” he declared as soon as I shut the door behind me.

“Oh, wow, I would never have guessed,” I said, heading into the kitchen so I could pour myself a glass of ice water.

“Hmph.” He was silent for a moment while I poured myself some water from the Brita pitcher in the fridge. “The only thing I’ve seen you working on is that ridiculous store of yours.”

I reminded myself that anyone who’d been stuck in a cat’s body for the greater part of sixty years had earned the right to be cranky. As far as I’d been able to tell, it was the late 1940s when a local witch cursed Archie to be a cat after he’d rejected her advances, and the whole time since, he’d been wandering around Globe, just another stray to the uninformed observer.

While I was sensitive to his plight, I also secretly wondered whether my magic was really up to the task of restoring him to his human form. His complaint to the contrary, I truly had been doing my research, trying to find the one spell or charm that might bring him back to himself. So far, it had been slow going. Once or twice, I’d even found myself wishing that Lucien Dumond was still around, if only because he’d been a pretty powerful sorcerer, and maybe he would have been able to come up with a solution, since one continued to elude me.

But Lucien was gone, so I had to go it alone. And it really didn’t help that Archie was constantly on my case about the whole situation. More than once, I’d reflected that the witch in question should’ve realized he was doing her a massive favor by turning her down. She probably would have hit him with a nasty hex after spending a few weeks in his company.

“You need to back off, or I’ll take you to the Humane Society,” I warned him.

Since Archie knew those words were an empty threat, he only tilted his head slightly before lifting a paw to give it a thorough licking. “You wouldn’t do that,” he said in between swipes with his little pink tongue. “You’re far too soft-hearted.”

No point in arguing with what I knew was the truth. “I ordered some books from a seller in New York,” I said. “They’re from the collection of a man who had the biggest library of occult works on the East Coast. I’m really hoping I’ll be able to find something worthwhile in there.”

“I hope so, too,” Archie replied. “This is all getting terribly tedious.”

“More tedious than when you were stuck wandering around downtown Globe without a home, scrounging from trash cans?” I asked innocently.

He shot me an evil glare and stalked off toward the second bedroom, which I used as an office and was where his bed was located. Not that he seemed to sleep in it much — he always seemed to be underfoot — but I think he liked hanging out in there because I also kept my altar in that room, and he knew he was getting in the way of me performing my rituals. I’d gotten to the point where I could mostly ignore him, true, and yet it still didn’t feel quite right to do that sort of thing with an audience.

Let’s just say Archie wasn’t going to win any awards as Roommate of the Year….