Tales of the Latter Kingdoms, Books 1-3

Three complete fantasy romance novels: Dragon Rose, All Fall Down, and Binding Spell (Books 1-3 in the Tales of the Latter Kingdoms series) 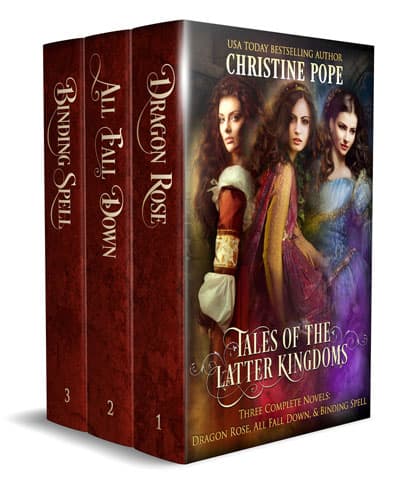 Three complete fantasy romance novels: Dragon Rose, All Fall Down, and Binding Spell. (Books 1-3 in the Tales of the Latter Kingdoms series)

The shadow of the cursed Dragon Lord has hung over the town of Lirinsholme for centuries, and no one ever knows when the Dragon will claim his next doomed Bride. Rhianne Menyon has dreams of being a painter, but her world changes forever when a single moment of sacrifice brings her to Black’s Keep as the Dragon’s latest Bride. As she attempts to adjust to her new life — and to know something of the monster who is now her husband — she begins to see that the curse is far crueler than she first believed. Unraveling the mystery of what happened to the Dragon’s Brides is only the beginning….

Healer Merys Thranion has been trained to fight disease and wage war against ignorance. Her training comes to the ultimate test when she is captured by slave traders from a neighboring country and brought to the estate of Lord Shaine of Donnishold. Her task is to heal the brooding lord’s injured daughter, but that is only the first of her trials. As the deadly plague raises its head again and threatens to wipe out everyone on Lord Shaine’s estate, Merys must summon all her skills to protect those she has come to care for…including the man who has become much more to her than simply her master.

A case of mistaken identity takes Lark Sedassa from her family’s estate and into the power of Kadar Arkalis, the ruler of North Eredor, who thinks he’s captured a much greater prize. Although he soon realizes his error, he makes Lark his bride anyway, still hoping to capitalize on her family’s connections. Escape is nearly impossible, and before long Lark is not sure whether she even wants to leave. As she struggles with her growing feelings for her captor, she must find the strength within herself to draw on powers she doesn’t even realize she possesses. Without those powers, she cannot hope to face the evil rising within the kingdom…or save the man she now calls husband.