Tales of the Latter Kingdoms, Books 4-6 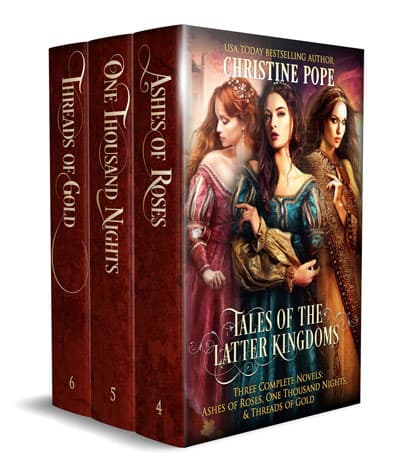 Three complete fantasy romance novels: Ashes of Roses, One Thousand Nights, and Threads of Gold (Books 4-6 in the Tales of the Latter Kingdoms series)

Even the Emperor of Sirlende cannot always do as he pleases, but when custom demands he find another bride after the death of his betrothed, a princess he barely knew, Torric Deveras defies his counselors and changes the rules rather than make a loveless marriage.

Ashara Millende is the only daughter of a nobleman, but had her inheritance stolen from her by her unscrupulous stepmother. A servant in the house that should have been hers, she dreams of escaping the drudgery of her life and finding someone who will love her for who she truly is.

When Torric invites all the marriageable women in his kingdom to a five-day holiday of feasts, tournaments, hunts, and balls so that he might choose an Empress from among them, Ashara never dreams that she can attend, much less catch his eye and win his heart. Then a woman with hidden secrets appears who will give Ashara the chance to win her heart’s desire — if only she is bold enough to take the first step.

Lyarris Deveras, Crown Princess of Sirlende, takes a leap of faith and accepts an offer of marriage from the ruler of the far-off kingdom of Keshiaar, although she knows it means she will never see her family or her homeland again. Betrayed by his first wife, her new husband has vowed never to love again. But with a little luck — and a bit of magical intervention — Lyarris plans to melt her new husband’s stony heart in this novel inspired by the Thousand and One Nights, set in the world of the Latter Kingdoms.

When Annora Kelsden’s father gets her family into financial trouble, it’s up to her to save them. Unable to truly spin straw into gold, Annora despairs for her life. When a mysterious stranger offers to help, Annora desperately agrees to his terms, thankful for his assistance.

After the king receives the gold he desires, Annora believes she’s safe from harm, only to realize that she’s spun herself a trap with seemingly no end. But can the consequences lead her where she never expected — into the arms and heart of her mysterious savior?