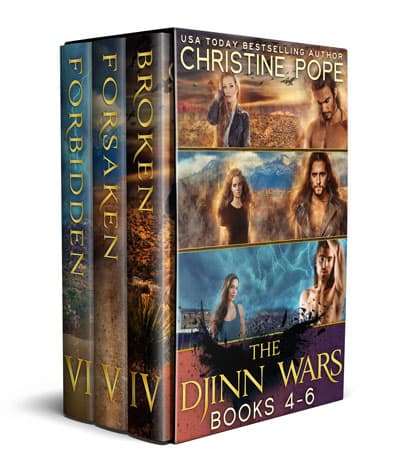 Julia Innes, leader of the Immune survivors in Los Alamos, has done her best to ensure that the rest of her fellow Immune have settled into their new lives after the Dying. Even the friendly Santa Fe djinn have followed suit, creating a calm between the two cities — a world of peaceful co-existence.

But all is not as it seems…

Although she refuses to give in to her feelings, Julia struggles with her need for Zahrias al-Harith, the leader of the Santa Fe djinn, knowing her desire will never be reciprocated. But when a crisis brings her face to face with Zahrias, she worries that she won’t be able to hide her attraction to the man who holds her heart. As an unforeseen threat shatters the fragile peace, Zahrias must confront an adversary from his past. Julia is forced into their conflict, catapulting her into the world of the djinn…and drawing her into a struggle where far more than just her heart is at stake.

More than a year ago, a djinn-created plague nearly wiped out all of humanity…

Ever since, Madison Reynolds has been hiding. Leaving her underground sanctuary means risking her life at the hands of vengeful elementals hellbent on killing off the world’s few remaining survivors. But when her curiosity and need for exploration get the best of her, she crosses paths with Qadim al-Syan, the new steward of Albuquerque. Despite her better judgment — and her fear of the djinn — she finds herself drawn into his orbit. She knows she must resist her ever-growing attraction for this otherworldly being, who’s unlike any man she’s ever met. But the pull just might be too great. Will succumbing to her desire mark her for certain death?

Sentenced to the worst punishment a djinn can receive…

Imprisoned in the outer circles of the otherworld, Aldair al-Ankara is doomed to unending suffering. Believing he’ll never escape, he’s accepted his dismal fate. But when destiny steps in, everything changes for Aldair.

Ever since the Heat wiped out most of the world’s population, Jillian Powell has done nothing but try to make herself useful and helpful. When a lab accident hurls her into the otherworld’s outer circles, a handsome stranger saves her from certain death. Escaping and finding sanctuary in an isolated New Mexico town, Aldair and Jillian fight their growing attraction for one another. But even as their chemistry intensifies, reality sets in. Suddenly, they both realize that keeping Aldair hidden from the rest of the djinn might be harder than they ever imagined….

“All 3 were stories of redemption of djinn who didn’t like humans very much. These love stories were very real, and I thoroughly recommend them for all.”—Amazon reviewer