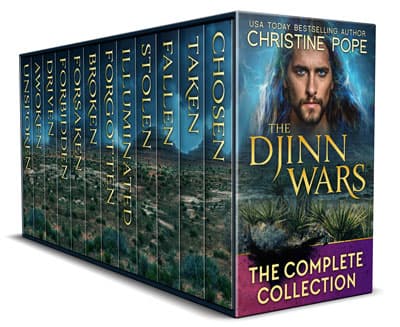 Note: The books in this omnibus edition appear in chronological series order, not in the order in which they were first published.

CHOSEN
In the aftermath of a fatal fever that nearly wipes out the world’s population, survivor Jessica Monroe encounters the sensitive and helpful Jace…who just might be hiding secrets of his own.

TAKEN
With her djinn lover imprisoned by a survivalist group intent on eradicating all his kind, Jessica Monroe teams up with another of the Chosen to make the dangerous journey into the heart of Los Alamos.

FALLEN
When a group of rogue djinn attacks Taos, Jessica Monroe has no choice but to activate the device that was created to rid the elementals of their supernatural powers, even though the machine’s very existence threatens to ruin the lives of her lover and friends.

STOLEN
Cornered by a djinn who’s been tracking her, Leila braces herself to be killed. Instead, her captor kisses her—and whisks her away to sanctuary.

Once Malik convinces her that she is his Chosen, she’ll be safe. But evil waits for Malik to turn his back for one crucial moment….

ILLUMINATED
Snowdrifts aren’t the only things that pose a danger in the mountain town of Cloudcroft, New Mexico. The only way to save her is reveal the extent of his magic…and trust that love will light her way to the safety of his arms.

FORGOTTEN
When the Heat wipes out most of humanity, Deirdre builds a device that disables any nearby djinn. Amaal, trapped by one human woman carrying a device capable of rendering him helpless, resolves to use their attraction to gain her trust — and his freedom.

He just never expected to lose his heart.

BROKEN
Julia Innes, leader of the Immune survivors in Los Alamos, has done her best to ensure that the rest of her fellow Immune have settled into their new lives after the Dying. Even the friendly Santa Fe djinn have followed suit, creating a calm between the two cities — a world of peaceful co-existence.

But all is not as it seems…

FORSAKEN
Ever since the Dying, Madison Reynolds has been in hiding. Leaving her underground sanctuary means risking her life at the hands of vengeful elementals hellbent on killing off the world’s few remaining survivors. But when her curiosity and need for exploration get the best of her, she crosses paths with Qadim al-Syan, the new steward of Albuquerque….

FORBIDDEN
Imprisoned in the outer circles of the otherworld, Aldair al-Ankara is doomed to unending suffering. Believing he’ll never escape, he’s accepted his dismal fate. But when destiny steps in, everything changes for Aldair.

DRIVEN
Bailey easily eludes the djinn reavers in her “salvaged” Porsche…until she encounters the one djinn who just won’t give up.

Guilt nearly crushes Nasim when he causes Bailey to crash. As she heals, he realizes she’s his Chosen. If he wins the race for her heart — best two out of three.

AWOKEN
When Jordan is caught stealing supplies, she only hopes her bullet will slow down the tall, muscular djinn long enough to escape and continue her journey to the last remaining human outpost.

Hasan al-Abyad plans to ferret out the fascinating, sad-eyed beauty’s secrets. Where she’s from. Where she’s going…and especially why she was never Chosen.

UNSPOKEN
When Idris, a djinn elder, encounters Amber, a young human woman he saved from attack during the Dying, each touch strengthens the desire humming between them. But he is acutely aware that Amber will soon be forced to choose between two paths…neither of which can ever lead to his arms.