The Witches of Canyon Road, Books 1-3 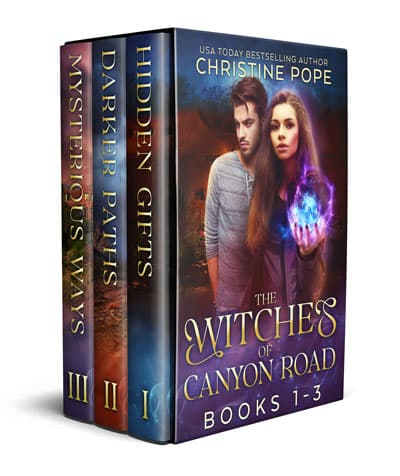 Miranda McAllister should have inherited unbelievable powers from her witch parents. But the lack of those powers can’t prevent her from fulfilling her destiny, a destiny decided before she was born…or was it?

A match decreed by fate. A love awakened by magic…

Life as Rafael Castillo knows it is about to come to an end. Twenty-one years ago, his grandmother, then head witch of the Castillo clan, helped the McAllister clan defeat a dark wizard…for a price. The payment, Miranda McAllister, is now on her way to be his bride. A medieval arrangement, but there’s no naysaying Rafe’s mother, who is intent on carrying out his grandmother’s wishes.

Miranda’s parents tried everything — even revealing her lack of magical gifts — to break this unholy bargain, to no avail. As her Halloween birthday approaches, she journeys to Santa Fe, where the betrothed she’s never seen awaits.

Their first meeting is more like Beauty clashing with Beast than Cinderella dancing away with Prince Charming. But their first kiss is electric, triggering a storm of emotions and odd experiences that make Miranda wonder if her long-dormant magic is finally bursting from its shell.

However, even as Rafe and Miranda begin to grow closer, threads of dark magic are weaving a spell that could destroy their clans’ alliance…and any chance for love.

A love lost in dark magic. A path to redemption obscured by evil…

Cruelly dumped at the altar by the man she loves, Miranda McAllister turns her back on Santa Fe and takes off with Simon Gutierrez, who promises to help her develop her newly awakened magical powers…even though her logical self warns against acting on impulse so soon after her humiliation at Rafe Castillo’s hands.

Under Simon’s patient guidance, Miranda discovers the astounding depth and breadth of her gifts. Yet too many unanswered questions leave her uneasy, especially when Simon indicates he’d like to move them out of the friend zone.

Rafe Castillo still can’t figure out what the hell happened the day of his wedding. A powerful spell forced him to spew those spiteful words at Miranda…and whoever cast that spell has covered their tracks so thoroughly, no trace remains — to Rafe’s human form, at least. His coyote alter ego can track fainter wisps of magic, magic as dark and hateful as the things he said that fateful day at the church.

Intent on finding Miranda no matter what, Rafe relentlessly follows a twisting, turning, increasingly deadly trail. But by the time he learns the truth, the race to save her from an unspeakable evil may already be lost….

A clan caught in an evil web. A witch who must sacrifice everything to save them…

Safe in Rafe’s arms at last, Miranda thinks the worst of the danger is past. She is dead wrong. The Castillo prima is murdered, and the clan is trapped by a hex. No one can leave New Mexico — or even send out a distress call.

Worse, Simon’s evil magic sends dark spells against the clan, targeting the vulnerable new prima herself. Desperate to keep anyone else from being hurt, Miranda has no other choice. She surrenders to Simon — only to discover his grand plan extends far beyond possessing her body. He covets her powers to summon the darkest demon of them all.

As Rafe works feverishly to track Miranda’s location, protect the clan, and find a loophole in Simon’s entrapment spell, Miranda realizes there is only one way to defeat Simon once and for all. Take on more power than she’s ever handled before. Make a deal with the lord of all demons. And risk everything to fulfill a destiny set in motion long before Rafe was a glimmer in her heart.

The Witches of Canyon Road