Book 1: The Witches of Cleopatra Hill

The right consort will unlock her magic. The wrong one will make her a prisoner.

Forty-three. That’s how many frogs Angela McAllister has kissed since she turned twenty-one. And it’s not for fun — she’s searching for the green-eyed man who haunts her dreams, the man she’s sure is fated to be her consort when she becomes the next prima of her witch clan.

Without that magical connection, she’ll never be able to access her full powers. Worse, as long as she’s an unattached virgin, she’s vulnerable to being kidnapped and manipulated by the rival Wilcox clan.

The clock is ticking, because upon her twenty-second birthday, the window of opportunity to find her mate will close forever, leaving her magic diminished and her clan vulnerable. It doesn’t help her growing sense of urgency that a malevolent spirit is stalking her, and the only guy who sparks that special attraction isn’t a witch at all. Just a handsome, dark-eyed, all-too-human college student.

On the eve of her birthday, the Wilcox clan makes their move, and it becomes all too clear that someone has betrayed Angela’s trust in the worst possible way….

Note: Darkangel is part one of the “The Witches of Cleopatra Hill,” the first series set in USA Today Bestselling Author Christine Pope’s witches and warlocks universe! It ends on a cliffhanger leading into the next installment, Darknight. Other interconnected series in the ’verse include “The Witches of Wheeler Park” and “The Witches of Canyon Road.” 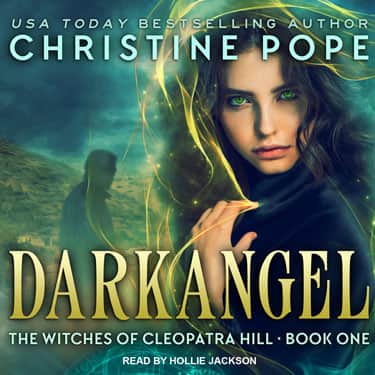