Book 2: The Witches of Cleopatra Hill

Danger can wear the most deceptive of disguises…

Angela McAllister thought Chris Wilson was just a cute guy she’d met at random. Then his part in her kidnapping became all too clear. He’s Connor Wilcox, younger brother of Damon, the Wilcox clan primus.

Her body is still tingling at the memory of the sweet fire of his lips on hers, and the heat that sealed their prima/consort bond. No matter what her body is telling her, Angela can’t want Connor. Yet as she settles uneasily into an unexpectedly peaceful existence with the quiet artist, she gets the feeling he’s no more of a willing participant in his brother’s schemes than she.

What’s done is done, and Angela resolves to build bridges rather than walls, though it’s not easy with her own clan giving her the cold shoulder. But when a series of gruesome deaths begin taking place around Flagstaff, Angela has a very bad feeling the killer is lurking close to home…and uncovering the truth could break the fragile trust she and Connor have worked so hard to build.

Note: Darknight is part two of the “The Witches of Cleopatra Hill,” the first series set in USA Today Bestselling Author Christine Pope’s witches and warlocks universe! It ends on a cliffhanger leading into the final installment, Darkmoon. Other interconnected series in the ’verse include “The Witches of Wheeler Park” and “The Witches of Canyon Road.” 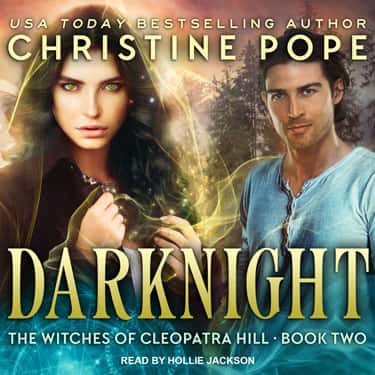