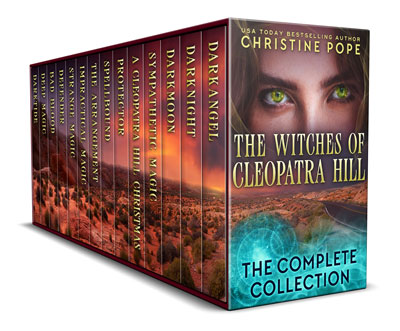 DARKANGEL
The future head witch of her clan, Angela McAllister must bond with her consort during her twenty-first year, but her dreams are haunted by a man she’s never seen. She faces a hard choice: give up her dreams of the man she may never meet, or leave her clan at the mercy of those who seek their ruin.

DARKNIGHT
Forced to re-evaluate everything she’s ever known about the Wilcox witches, Angela begins to explore the powerful connection that binds her to Connor Wilcox, despite the generations of hostility between their families and the disapproval of those closest to her.

DARKMOON
One hundred and fifty years ago, a terrible curse descended on the Wilcox clan, dooming generations of women to an early death should they bear a child to the bloodline of Jeremiah Wilcox. Now Angela McAllister is carrying Connor Wilcox’s child, and if she can’t find a way to break the curse, that same doom will fall upon her….

SYMPATHETIC MAGIC
Warlock “Lucky” Lucas Wilcox has a gift that ensures his success in all things, but his magic fails him completely when it comes to sexy Margot Emory, the vibrant “elder” of the McAllister witch clan.

A CLEOPATRA HILL CHRISTMAS
Connor and Angela Wilcox return to Angela’s hometown of Jerome, Arizona, to spend the holiday with the McAllister witch clan and attend Lucas Wilcox’s and Margot Emory’s wedding. But problems arise as they try to juggle new parenthood, interfering relatives, and romantic complications in this lighthearted holiday novella.

PROTECTOR
Caitlin McAllister has been keeping a secret. While her clan suffers for lack of a seer, she’s been hiding her gift of second sight — hiding and running away from a destiny she does not want and has done her best to escape. Unfortunately, she finds that keeping secrets carries its own price when she and two of her friends end up in the hands of three evil warlocks who seem intent on using the young witches for their own dark purposes.

SPELLBOUND
Damaged and desperate, Danica Wilcox searches for sanctuary and peace of mind after enduring vile and brutal treatment by the dark warlock Matías Escobar. Hoping for safe haven at an old summer cabin owned by the Wilcox witch clan for more than a hundred years seems to be her safest option. But when her rejuvenating R&R is interrupted by a ghostly visitor, Danica sets out to solve the mystery of his death.

THE ARRANGEMENT
Jeremiah Wilcox’s wife died cursing him and all the sons of his line. Struggling with his solitary existence, Jeremiah has spent the days since her death ensuring his family prospers…even while wishing for what he knows he’ll never have.

IMPRACTICAL MAGIC
Still struggling to deal with the brutal murder of her younger sister at the hands of a dark warlock, Jenny McAllister is going through the motions, doing her best to pick up the pieces and move on with her life. Meeting Colin Campbell at a family event changes everything….

STRANGE MAGIC
Life for Zoe Sandoval, the future prima of the de la Paz witch clan, is not going as planned. As if being almost kidnapped by a dark warlock wasn’t bad enough, Zoe’s struggling with her birthday closing in — and she still hasn’t found her destined soulmate. Frustrated and at the end of her rope, Zoe takes matters into her own hands, using her magical gifts to conjure the perfect man of her dreams.

DEFENDER
The last thing Detective Jack Sandoval needs is another witch-related crime to sweep under the rug. As the de la Paz witch clan’s expert in defensive magic, Jack knows there is some deeper form of ritual dark magic involved…and one look into the beautiful, stricken face of the victim’s widow tells him she isn’t the culprit.

BAD BLOOD
As she journeys from Scotland to Arizona to wed her dull-as-dishwater betrothed, Hannah McAllister encounters a handsome, compelling warlock, Nathan Wilcox. A walk in Central Park, a kiss, and the die is cast for love, betrayal, and a spell whose impact will reverberate for generations to come…

DEEP MAGIC
Hayley McAllister has a rare gift that an evil warlock covets for his own. Levi would give every last drop of his high-octane magic to save her…but it might cost him his life.

DARKTIDE
When Angela and Connor try to find out who — or what — killed a de la Paz clan member private investigator, they realize the clans are being set up for destruction. The clans must unite and learn to control dangerous new powers to defeat their deadliest enemy…once and for all.