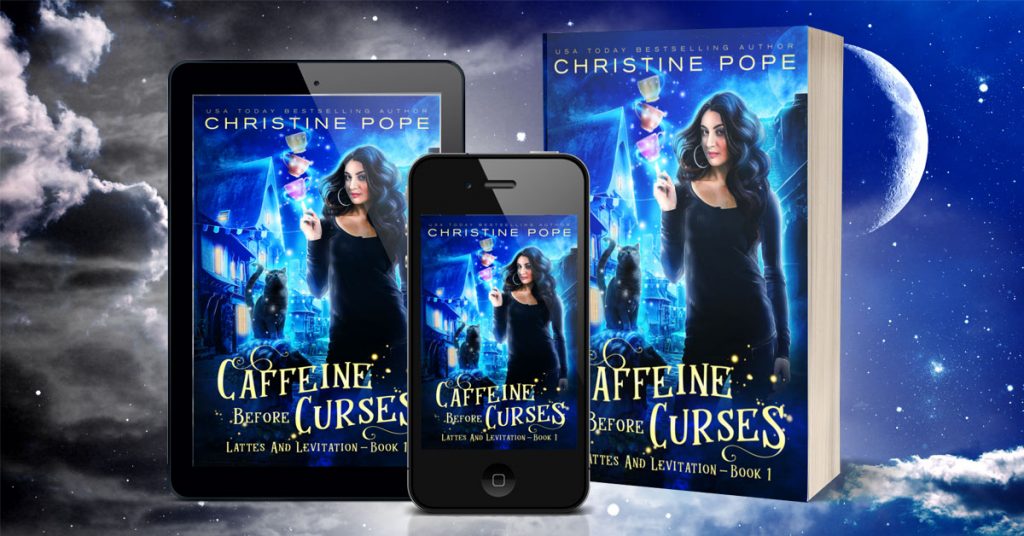 The release of Caffeine Before Curses, the first book in my NEW Lattes and Levitation series, is coming up fast, so here’s a little sneak peek. The series is a small-town paranormal cozy, but it’s different from Hedgewitch for Hire in that the heroine isn’t too sure of her supposedly magical gifts, and rather than being a “fish out of water” like Selena, Skye O’Malley, the heroine of the series, is a local girl in the real-life town of Las Vegas, New Mexico.

As I pulled into my driveway, I noticed a shiny black Bronco parked in front of the Sullivans’ house and frowned. I definitely didn’t recognize the vehicle; Tina Sullivan drove a white Honda Accord, and her husband Ian had a Chevy Silverado pickup.

The mystery of that brand-spanking-new SUV was cleared up soon enough, though. Almost as soon as I got out of my Subaru Forester and locked it up — my plan was to eventually get the garage cleared out so I could park the car inside, but so far I hadn’t made much progress on that particular project — Max Sullivan came down the sidewalk toward me.

Under the soft glow of the street lamps and the nearly full moon overhead, I could see he still had the same megawatt smile I remembered so well, the kind of smile that looked as though it could light up a room…and a couple of city blocks while he was at it. An unwelcome little tingle went through me, even as I found myself very glad that he’d caught me coming home from a party, and so my unruly hair had been tamed into some almost stylish waves, and I wore makeup and a lightweight summer dress with a cheerful red and turquoise floral print.

“Hi, Skye,” he called out cheerfully, as though the last time we’d seen one another was only the day before, and not almost a decade ago.

“Hi, Max,” I said, hoping I sounded as breezy and natural as he did, even though it felt as though I had about a million butterflies swirling around in my stomach. “I didn’t know you were coming to town before the film crew got here.”

Because even though shooting was supposed to start on Tuesday, I’d heard through the grapevine that the cast and crew mostly wouldn’t be showing up until Sunday and Monday. Why they were leaving it to the last minute, I didn’t know. Maybe they didn’t want to spend any more time in the boondocks than they absolutely had to.

Max shrugged. “I thought I’d come early and get myself settled. I’m renting Sunset Ridge while I’m here for the shoot.”

My eyes widened before I could stop them. Sunset Ridge was a big ranch on the east side of the highway from Las Vegas, set on a low hill that provided spectacular views of the eastern slope of the Sangre de Cristo mountains, views that had given the ranch its name. The place had once been a working ranch, but had since been converted into a luxury vacation space, the kind of facility fancy corporations would rent out for a retreat weekend, that sort of thing. I’d never been inside the house, but I’d seen pictures, and so I knew it had been completely renovated and had all the bells and whistles one might expect from that sort of property — a huge kitchen with top-of-the-line chef’s appliances, a swimming pool and spa, tennis courts, a putting green, even a bocce ball court.

How much must it cost to rent a place like that? Twenty grand a week?

Not that Max couldn’t afford it. I might not have been keeping track religiously, but even I knew he’d wandered into eight-figure range for his past couple of movie deals. Eighty thousand bucks to rent the ranch for a month would be chump change to someone like him.

I knew I was focusing on the logistics of his stay in Las Vegas because it was easier to do that than to think about how great he looked, how until that moment, I hadn’t realized how much I’d missed the sound of his voice or the way his smile seemed to light up a ten-yard radius around him.

“Does the place come with GPS in case you get lost somewhere inside?” I asked, my tone joking, and he flashed me another of those high-powered grins.

“Absolutely.” His expression turned almost sober then, and he went on, “I was hoping I’d bump into you, Skye. Do you have time to talk?”

That sounded serious. Then again, we’d been good friends for a pretty big chunk of our lives. Maybe all he wanted to do was catch up.

“Sure,” I said. Because I’d bailed out of Deanne and Mike’s party early, it wasn’t even nine o’clock yet, so I couldn’t really use the late hour as an excuse to beg off. “Come on in.”

I reached into my purse to get my keys as I mounted the porch steps, Max only a few feet behind me. Although I couldn’t really see his face, I had to think he must have smiled again when the third step creaked, just as it always had. Over the past year or so, I’d had a lot of work done to the house, including having it repainted a soft gray with deep blue on the shutters and trim, but I couldn’t quite bring myself to fix that one step.

Cool air greeted us as soon as we entered the house, a welcome relief after the oppressive heat of a late August night. We’d had monsoon storms the past couple of days, but this particular Saturday had been clear, with not a single cloud or drop of rain to soften the hot, dry winds.

“Wow,” Max said after he took a quick glance around the living room. “This isn’t anything like I remember.”

No, it probably wasn’t. When I was growing up here, the house had been decorated with a collection of mismatched antiques and some unfortunate chintz my grandmother had acquired in the ’80s and never bothered to get rid of. While I loved the place because it was home, it had also felt dark and crowded and closed in. After Grandma Maureen left me the house and after I’d slowly made my way through the grieving process, I realized it really did need a breath of fresh air and had gone full-on “modern farmhouse” on my newly acquired home, opening up the kitchen and completely redoing everything in soft shades of buttermilk white and gray with soft blue accents.

After all, she’d told me on more than one occasion that I shouldn’t cling to the past after she was gone and should make it my own.

“I might have gone a little crazy with the redecorating,” I admitted.

Max let himself look around for another moment before his attention returned to me. “It looks great,” he said, then added, “And so do you.”

In that awkward moment, I was glad I’d only left on a single floor lamp and the iron pendant fixtures over the island in the kitchen. Maybe the lighting was dim enough that he wouldn’t be able to see the way I flushed at his off-hand compliment. Although I definitely favored my mother in looks — at least based on the few photos she left with my dad before she took off — I hadn’t inherited her olive complexion, my fair skin making my dark brown eyes and hair stand out that much more.

And I was definitely what my grandmother used to refer to as a “late bloomer.” All through high school, I’d been skinny and awkward, barely any curves at all, nose too big for my face, and I’d pretty much resigned myself to ugly duckling-hood for the remainder of my days. The year I turned twenty, though, some kind of magical transformation had taken place, and all those sharp angles and odd proportions had smoothed themselves out. It wasn’t that I thought I could compete with any of Max’s leading ladies, but at least I didn’t feel like I had to walk around with a bag over my head all the time.

Too bad he’d already been long gone to Hollywood by the time I felt truly socially acceptable.

Get Caffeine Before Curses for the introductory price of just $2.99 at these stores: