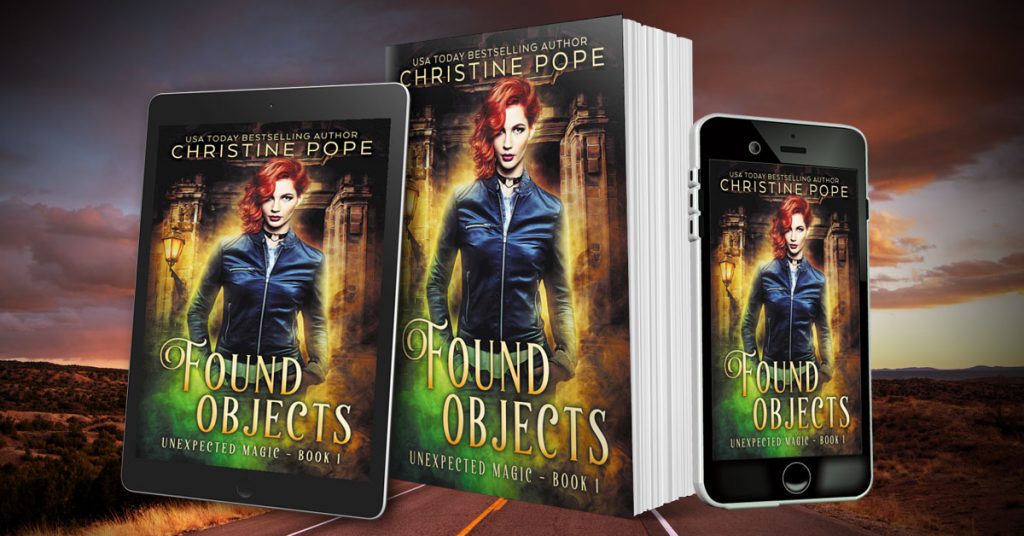 It’s Sunday, so you know what that means — it’s time for a sneak peek at Found Objects, the first book in my NEW urban fantasy series, Unexpected Magic! This is a snippet from Chapter 1, where our heroine, Penny Briggs, realizes she’s stumbled onto something very strange….

I watched from the side, since there wasn’t anything else I needed to do at this point. At the same time, I found myself almost holding my breath. What if the new glasses didn’t fit? What if they were more fragile than they looked, and one of the lenses fell out at a critical moment? What if…?

“What the fuck!” Jim Lincoln burst out. He’d just settled the glasses on the bridge of his nose, but almost as quickly, he pulled them back off and all but threw them onto the desk in front of him.

Not that I could blame him. The eyeglasses I’d just bought were supposed to solve a problem, not create a new one.

“There is something seriously wrong with those glasses,” Jim said. His whimsical eyebrows — probably part of the reason he got cast in these sorts of roles so often — were pulled together in a scowl, but I could have sworn he looked almost more frightened than angry.

“‘Wrong’ how?” Deanna asked. She’d also been standing off to one side, but a little closer to the director than my almost hiding place. “They’re in very good condition.”

“I don’t give a shit about their ‘condition,’” Jim retorted. “When I put them on, I felt like I was about to pass out.”

Deanna and Troy exchanged a glance. I knew there were rumors that Jim Lincoln bent the elbow a little more than was preferable, and I could only guess that the director and the costume designer were wondering whether he’d tipped something into his morning coffee while I was out running my errand.

“Well, let’s try the other pair,” Troy said, his tone a little too soothing, as if he knew he needed to humor his actor if he was going to get any work out of him today at all.

The director had barely finished speaking before Deanna had hurried over and set down the replacement pair of spectacles and retrieved the ones that had given Jim so much trouble. As he set those ones down on his nose and announced they seemed to be just fine, she handed the original pair to me and said in a murmur, “Check these out when you have a chance. If there really is something wrong with them, then you should probably take them back.”

I almost told her the antique mall didn’t allow any returns, then decided it wasn’t worth the effort. Instead, I nodded, wrapping my fingers around the glasses and then beginning to make my way toward the back of the soundstage. I figured I could surreptitiously try them on there and see if they really were defective in some way.

My own fault for not trying them on before I bought them, I supposed.

With Jim and his glasses apparently settled, filming began for real this time. Since I didn’t think I would be needed for a while — and even if I were, I was still within earshot — I paused by the back door to the sound stage and set the glasses on my nose.

At once, the darkened stage around me seemed to disappear, and I saw a bright, sunlit canyon, its walls red rock, marked here and there by scrubby evergreens that I thought might be junipers. A light wind stirred dry grasses, although the scene was utterly silent.

An ingrained habit of knowing to remain quiet at all times during filming stopped me from letting out a startled gasp. Instead, I lifted the glasses, and the ordinary darkness of a soundstage in use settled around me. I put them back on, and the canyon scene appeared in front of my eyes once more.

What the hell was the deal with these things?

Found Objects officially releases on Wednesday, April 27th, but you can buy it NOW directly from my store!

Or you can pre-order it from these online stores: