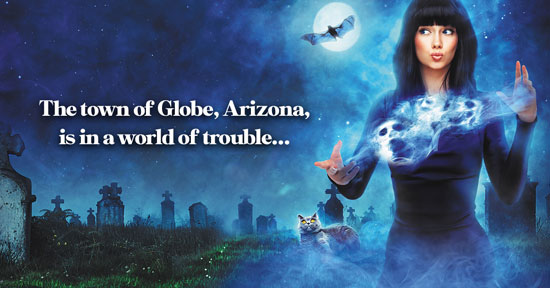 Well, we’re just a few days away from the release of Grave Mistake (Hedgewitch for Hire – Book 1), and so I thought I’d give you a little sneaky peek at the book. And since I’ve got kind of a crush on him myself, I thought I’d include a snippet of the scene where we meet Calvin Standingbear, the hunky chief of the local tribal police. 🙂

And then he walked in.

I was so focused on his handsome, strongly marked features and the long, night-black hair pulled back into a severe ponytail that at first, I didn’t even realize he was wearing a uniform of some sort. Cop? I supposed so, but the members of the Globe P.D. that I’d spotted during my time in town had worn dark blue uniforms, while this stranger’s was khaki.

“Calvin Standingbear,” came Josie’s voice at my ear, and I turned to see her standing a foot behind me, a knowing smile on her face. “He’s the police chief for the San Ramon Apache tribe. They operate the casino just down the road.”

Right. I vaguely recalled seeing a turnoff for a casino when I was out exploring in my Beetle, but because gambling had never been my thing, I hadn’t paid it very much attention. And I knew I’d seen people shopping at the Walmart in Globe that I guessed had to be Native American, although I didn’t know anything about the local tribe.

“I hope he’s not here to check for a liquor license or something,” I joked. Josie had assured me that as long as I was giving the wine away and not expecting people to purchase anything in exchange, I should be fine, but my stomach did a nervous flip-flop anyway.

Or maybe that was simply how my body had decided to react to the godlike specimen who’d just entered the shop.

She waved a hand. “Oh, the tribal police don’t have jurisdiction here in town. No, he probably dropped by to take a look because he was curious. People have been talking about this place since you moved in.”

“I had no idea I was such a topic of conversation.”

All right, my comment was probably a little disingenuous. No, I’d never grown up in a small town, but I knew my arrival had caused something of a flutter in Globe, if only because a town that size didn’t get a lot of people moving in, and to have someone show up and buy a highly visible property sight unseen — and for cash, no less — would naturally start tongues wagging.

How did they know I’d paid cash for my live/work space? Because I might not have been around all that long, but I’d already learned that Josie was a world-class gossip. She tended to slide tidbits about people and their goings-on into conversations, coming at them sideways rather than making a full-blown announcement, and yet it was pretty obvious that it would be hard to have any secrets in my new hometown.

Not that I had many to keep. True, I hadn’t gone around blurting out that the cat I’d adopted was actually a cursed human in disguise, but otherwise, people pretty much already knew the worst about me…or at least, what they would have considered the worst. After all, if I’d wanted to hide the fact that I was a practicing witch, I probably wouldn’t have opened a big ol’ pagan shop right in Globe’s historic downtown.

All I got in response to my comment was a knowing smile from Josie. And then — to my chagrin — she raised a hand and called out, “Calvin! Come over and meet Selena!”

I wanted to sink through the newly polished floor. Instead, I managed to stand there and did my best to look interested in a neutral, completely nonsexual sort of way as he walked over to me. Once he got closer, I realized how tall he really was. I stood five foot eight in my stocking feet, so I wasn’t exactly what you could call short, but it still seemed as though he towered over me.

A friendly smile crinkled his dark eyes, showing a few laugh lines around them. “Hello, Selena,” he said. His voice was deep, and he spoke in a deliberate sort of way, as if he considered each word before releasing it into the wild. “The shop looks very nice.”

Utterly prosaic words, and yet they started my heart beating at a ridiculous pace. Yes, ridiculous. I was a grown woman who’d be turning thirty in two months. I shouldn’t be reacting to a man — all right, a pretty magnificent specimen, but still — like I was some seventh-grader getting asked to dance for the first time.

“Thank you,” I responded. Josie had said he was the chief of police on the reservation. Did that mean I should call him Chief Standingbear? It was his formal title, but I had a feeling I would sound like an idiot if I said the words out loud. Probably better not to say his name at all. “Brett and Hazel really helped to make my vision come to life.”

Oh, Goddess, that sounded so pretentious. I wished I could bite my tongue, but since the damage was done, I thought it was probably best just to hurry on and hope he hadn’t noticed.

“Would you like a glass of wine?” I asked.

“Not while I’m in uniform,” he said, and again, an awkward flush rushed to my cheeks. Damn, I really was making a hash of things, wasn’t I? But before I could stammer an apology, he went on, “I’ll get myself some water. Thanks for the offer, though.”

I nodded and tried to smile. Josie stepped in then, saying, “Calvin, I heard a rumor that the tribe is thinking of canceling the poker tournament next month. Tell me that isn’t true.”

Maybe his mouth quirked ever so slightly at the overly tragic tone of her voice. “We’ve been discussing it. Attendance has dropped off the past few years, and we’re wondering if it’s still worth the effort.”

“But it brings so much to the town,” she protested. “Maybe all you need to do is advertise a bit more.”

His expression didn’t change. “I’ll bring it up with the elders. We’re going to have to make a decision soon, either way.”

Josie’s bright blue eyes lit up in a way that I was already learning to dread. “You should have Selena cast an abundance charm for you!”

“I don’t think — ” I began, but she waved a hand, even as the twitch at the corner of Calvin’s mouth turned into a lopsided smile.

“I’ll take it under advisement,” he said, then nodded toward me. “Nice to meet you, Selena. You’ve got a great store here.”

And before either I or Josie could say anything else, he headed off toward the refreshments.

I tried to keep the accusation out of my voice as I remarked, “Well, that could’ve gone better.”

Another of those dismissive hand waves. “Oh, it went fine. I think he likes you.”

She chuckled. “Oh, but I know Cal, and you don’t. He’s not the type to give compliments if they’re not justified. I can tell he’s impressed with the store.” Her voice lowered, and she added, “He’s single, in case you were wondering.”

“I wasn’t,” I said crisply, even though that was a flat-out lie.

“Mm-hmm.” Apparently, Josie wasn’t buying it, either. “Never married. I don’t know why. I guess he was just waiting for the right girl to come along.”

Grave Mistake releases on Wednesday, January 6th, but you can pre-order it here: