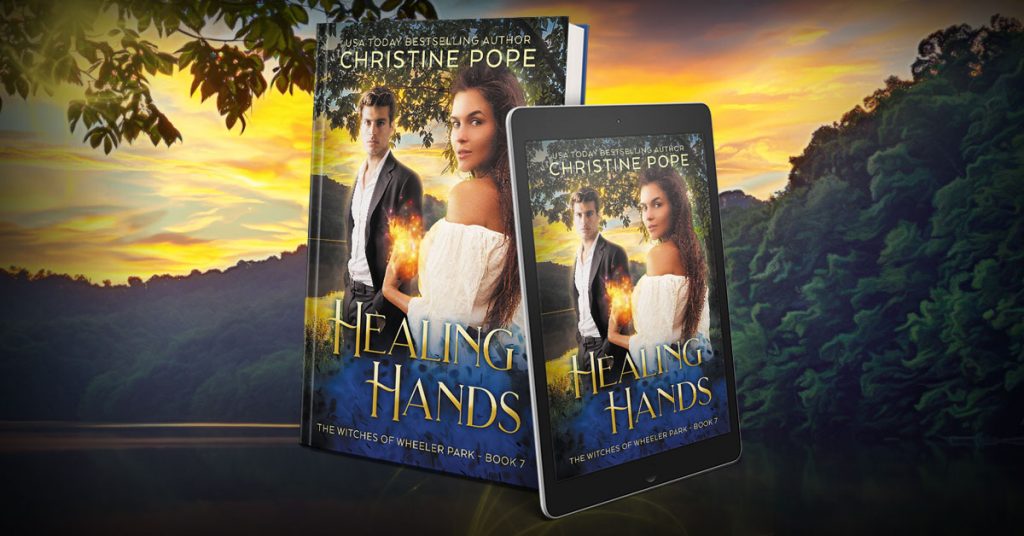 We’re getting close to the release of Laurel’s story in Healing Hands, so it’s time for a sneak peek at the novel! This snippet is from the hero’s point of view.

Jason had to prevent himself from startling as he watched Cole Michelson escort a very pretty girl probably a few years younger than his own twenty-six through the front doors of the Carson City Courier’s offices. They were close enough that Jason experienced a low hum in his right ear as the girl walked by — a sure sign that she was also witch-kind.

Then Michelson said, “Best of luck, Ms. Wilcox,” and offered her a somewhat rusty smile before he headed back inside the building.

That gorgeous girl was a Wilcox witch?

It sure seemed that way.  A tingle of shock flashed down his spine, even as Jason told himself there was no way she could possibly know who he was. Since he could hold an illusion much longer if it wasn’t too complicated, he hadn’t done a lot to change his appearance. He still looked like a tall man in his middle twenties, only his hair was dark brown instead of dark blond, and his eyes were dark to match, his skin a deeper tan than normal.

Most of his energy had gone toward making sure that the spark of his witch nature was tamped down so fiercely, no one could possibly be able to detect that he wasn’t a run-of-the-mill civilian. He’d gone to that effort since he knew he’d be deep in Delmonico territory and would have to do his best to avoid notice. Not once had he thought he’d have to be dodging the Wilcoxes as well.

What the hell was a Wilcox witch doing here?

Even as the question flashed through his mind, however, Jason thought he could guess. Although the Ludlows didn’t have any direct contact with the Wilcoxes — for obvious reasons — rumors had begun to circulate through the various witch clans that apparently the Wilcox family had taken it into their heads to try looking for any witches or warlocks who were operating outside the normal clan structure, and then was reuniting the people they found with their families. What the Wilcoxes got out of the deal, Jason wasn’t sure.

What he was pretty sure about was that this girl must have come to this part of the world in search of the same healer Jason was looking for. The real question was, had she come here alone, or did she have other Wilcoxes with her?

She was already a few yards down the sidewalk, moving quickly, as if she had a destination already in mind. If he didn’t follow soon, he’d lose her altogether.  And although he’d come to Carson City to do the exact same thing she’d obviously already done — namely, talk to the reporter who’d written the story about MaryJo Gaffney — Jason had a feeling there was no point in initiating such a discussion now. Reporters tended to be naturally suspicious people anyway, and this Cole Michelson would smell something fishy right away if someone else showed up and started asking questions about the mysterious healer.

No, much better to tail the Wilcox witch and see what she was up to….

Healing Hands releases on Wednesday, May 19th. Pre-order it now at these stores: