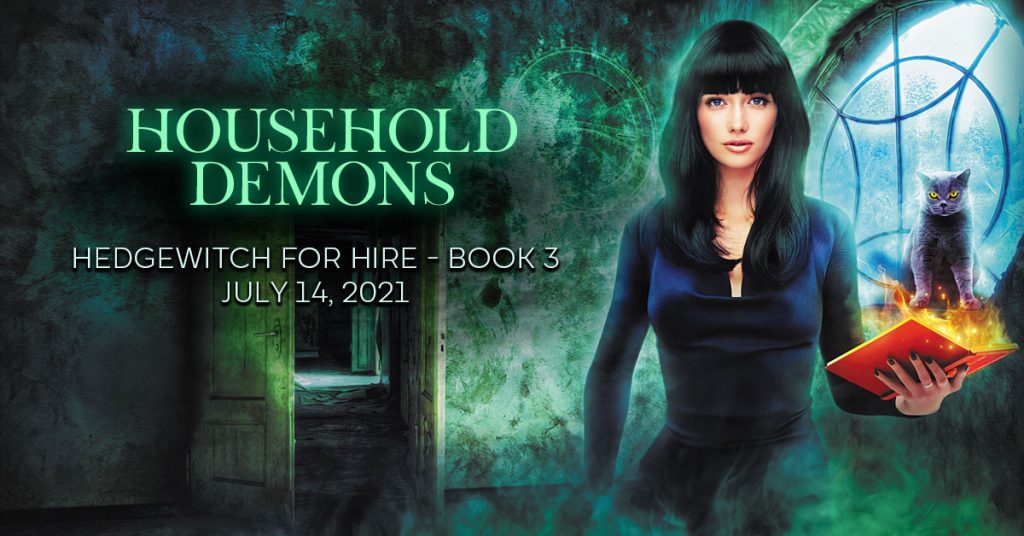 Household Demons, the third book in the Hedgewitch for Hire series, will be out in a few days. That means it’s time for a sneak peek!

My phone was buzzing on my nightstand. I blinked at the clock.

Who the heck would be calling at that hour?

I grabbed the phone without even looking at the screen, except to touch the green button to accept the call. When you got a call in the middle of the night, you answered it.

My mother, sounding shaky and completely unlike the woman who’d laughed her way through a two-margarita dinner at Olamendi’s earlier in the evening.

“I specialize in crazy,” I assured her. “What’s the matter?”

“‘The house’?” I repeated, not sure what she was driving at. Had the roof started leaking again? But no, the monsoon storms had moved westward, and I’d gotten a nice view of a nearly full moon and a clear, starry sky just before I closed the drapes and got ready for bed.

“Yes.” She hesitated, then said, all in a rush, “There were just these horrible noises that started a little while ago. Tom thought it might be the plumbing, so he went out to see what was going on. But he couldn’t find anything.”

“What sort of noises, Mom?” I asked, a sinking sensation starting somewhere in my midsection. Horrible noises starting between midnight and three o’clock in the morning was never a good sign.

“Like a — a banging, as if there was something inside the wall. That’s why Tom thought it was the plumbing. But then it went from banging to a sort of clanging, like metal pots and pans hitting each other. Then there were the voices.”

“‘Voices’?” I echoed, and wished I hadn’t. The word had come out a little too close to a squeak to exactly inspire confidence.

“It sounded like whispers at first,” she said. “But then it turned into a horrible kind of screechy laughter. We both wondered if it might be rats squeaking, but it really didn’t sound like that.” A long pause, and then she went on, “Something about the whole thing just feels wrong, for lack of a better word. And normally I wouldn’t bother you, but this all seems like it might be something you would know about.”

The words slipped out before I could stop them. “Ready to believe in ghosts now, Mom?”

A pained little silence. “I don’t know. But I’ve never encountered anything like this before in my life. I suppose Tom and I could leave and go to a hotel — we saw a Best Western as we came into town — but we just bought this house. I don’t want to run away.”

“You won’t have to,” I said stoutly, even as I hoped I wasn’t making promises I couldn’t keep. “I’ll get dressed and come over. In the meantime, you and Tom stay together and wait for me downstairs. Oh, and if you have any white candles, light them all.”

Right then I really didn’t want to go into a lecture about how white candles were one of the best ways to push back against the powers of darkness. And honestly, I didn’t know whether that was even what was going on here. There could still be a perfectly logical explanation for the phenomena my mother and her husband were experiencing…even if I couldn’t quite think what it might be at the moment.

“Just do it, Mom. I’ll be there in fifteen minutes. All you need to do is hold down the fort until I get there.”

“Okay. I think I saw some white taper candles in the candelabra in the living room.”

“Perfect. Light them all — and turn on every light in the house.”

Another one of those long pauses. “What’s going on, Selena?”

“I don’t know,” I said honestly. “But turning on the lights will make you feel better, if nothing else, right?”

I hung up then, and set my phone down on the nightstand. My heartbeat had sped up, and little tingles of cold worry were working their way along my spine. In my magic, I took the path of the light and did my best to ignore the darker things in the world.

That didn’t mean they didn’t exist.

Resolute, I went to the dresser and got out a fresh pair of jeans and a clean T-shirt.

As I got dressed, I found myself wondering if there was any place in Globe where I could get some holy water….