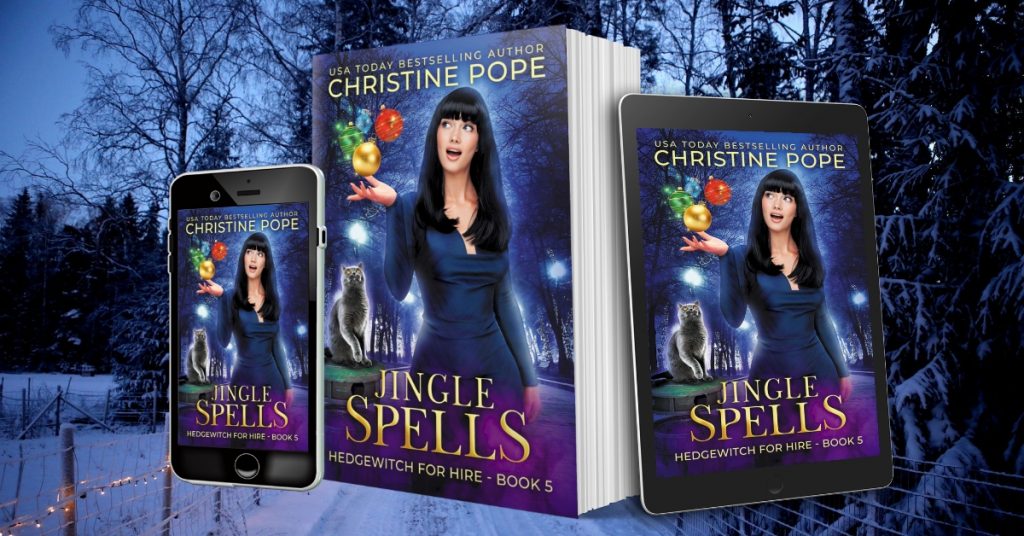 I can’t believe it’s almost December! But it’ll be here Wednesday, which is why it’s time to take a look at Jingle Spells, the newest release in my Hedgewitch for Hire series. It’s just 99¢ now through December 7th!

The front door to my shop was flung open, and Josie Woodrow, real estate agent extraordinaire and current head of the Globe Chamber of Commerce, strode inside, lifted her hands, and exclaimed, “Baby Jesus is missing!”

I’d been just about to take a sip of peppermint latte, my current seasonal indulgence from Cloud Coffee. However, I set the go-cup back down on the counter and said, “Um…what?”

“Baby Jesus,” she replied, now looking irritated, her light blue eyes snapping. She approached me where I stood behind the store’s counter, then stopped and crossed her arms. A Christmas tree pin made of multicolored rhinestones glittered on the lapel of her bright green jacket. Josie was serious about dressing for the season, and now, with the holiday only a little over a week away, she was pulling out all the stops. “I went to check on the decorations at the crèche in front of St. Ignatius, and Jesus was gone!”

This was my first Christmas in Globe, but I’d known as soon as all the decorations started going up right after Thanksgiving that this was a town which took the holidays seriously. All of Broad Street had holly leaves and red velveteen bows attached to the street lamps and even swagged across the roadway from building to building, and the Chamber had politely informed all of us shop owners that we needed to decorate our front windows to keep the spirit of the season going.

This request applied even to pagan heathens like me, although Josie — who’d written the letter — had been careful to refer to them as “holiday decorations” without specifically calling out Christmas.

Which was fine. I loved the winter holiday, even though I celebrated Yule on the solstice, rather than Christmas Day. I’d hired my friend Hazel Marr to paint the front window of Once in a Blue Moon with a glittering border of snowflakes, and I’d bought ornaments in silver and gold to highlight my current display of books and minerals and jewelry.

One of the showpieces of the town’s Christmas spirit was the large crèche that took up residence on the front lawn of St. Ignatius, complete with a carved Mary and Joseph and the three wise men, along with a complement of barnyard animals.

And of course, baby Jesus, who was placed in his cradle every year by the church’s presiding priest.

“I’m sure it was just kids,” I told Josie, doing my best to sound both concerned and soothing at the same time. This was her first year as president of the Chamber, since she’d taken over those duties after the former president, Miriam Jacobsen, had been arrested — and now convicted — for conspiracy to commit murder. Her trial had taken place at the beginning of December, and she was currently spending ten years in the Florence correctional facility…a far cry from the stately house where she’d lived on Bailey Street up on the hill.

In fact, Miriam’s sister Beth Faulkner and her nephew Jack had descended on Globe a few days earlier, apparently to pack up her belongings so the house could be sold. Town gossip reported that Miriam had used up most of her savings paying for her defense, and so there was no way she’d be able to hold on to the house during the tenure of her prison stay, even if she managed to get released early for good behavior.

Considering what I knew of Miriam’s standard haughty attitude, I had a feeling that a “good behavior” release wasn’t in the cards for her. Prison guards tended to take a dim view of that sort of conduct.
Josie sniffed. “Well, that was my first thought, too. But Henry has talked to the most likely suspects, and they all said they don’t know anything about it.”

Henry Lewis, Globe’s chief of police — and a man I tended to regard as my nemesis, since he wasn’t exactly a fan of the way I kept solving murders under his nose — was exactly the sort of person I’d believe had a list of “usual suspects” among the youth of Globe. No doubt he thought that riding skateboards on the sidewalk or sneaking a cigarette under the bleachers during a football game was just the first step in a life of crime, and escalating to stealing Jesus out of the St. Ignatius crèche seemed like a logical progression of those misdeeds.

“It’s got to be a prank,” I said. “Even if the kids Henry talked to didn’t know anything about it, there has to be someone who does. Maybe someone is trying to rattle your cage.”

That suggestion made Josie draw herself up to her full five feet, two inches, light blue eyes snapping. “I do not rattle,” she replied sternly.

Get Jingle Spells for the introductory price of just 99¢, now through December 7th!