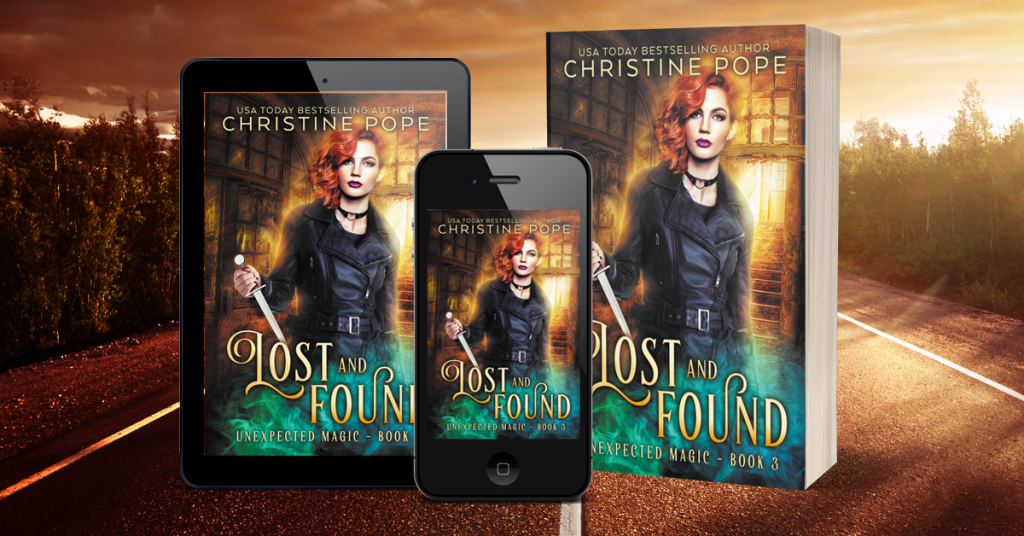 Lost and Found, the third book in my Unexpected Magic series, is almost here…and that means it’s time for a sneak peek! Here’s an excerpt from the book as Penny pursues one of the clues her biological mother left for her to find.

The compass had definitely decided to wake up now. Instead of continuing with its lazy circuit of the dial, the needle had swung to the northeast, indicating the same direction as that wonderful twinge in my neck. That seemed to clinch the matter.

Time to get moving.

Once again, I found myself wishing I’d gotten my act together and bought some real hiking boots before we left on this expedition. In fact, I made a mental vow to myself that if I survived this scramble down the hillside, I’d go to the REI in Santa Fe as soon as I got back to town and make sure I was properly outfitted in case I had to do even more exploring to find the remaining answers to the riddle. After all, even if I did manage to locate the patriarch’s tears, there was that whole “circle of iron” thing to figure out.

Well, sufficient to the day and all that. I’d worry about the iron circle after I had the patriarch’s tears safely in hand.

My work boots slipped here and there, but somehow I managed to make it all the way down the path without landing on my ass or falling over a cliff or anything. The floor of the canyon was rough as well, strewn with enough rocks and boulders to tell me water definitely must flow through here during monsoon season, although things were dry enough at the moment, thank God.

The compass still pointed northeast, and so I followed it along the canyon floor, the skin at the back of my neck beginning to prickle as my surroundings grew more familiar — that sheer red rock wall to one side, the smoother shape of a mountain off to the left.

This was definitely the canyon from my vision, the one that had blindsided me when I put on Mina’s eyeglasses for the first time.

I stopped and looked in all directions, but I was utterly alone here, without even the call of a bird or the hum of an insect to break the silence. The only sound was the wind in the dry grasses.

My utter solitude should have been reassuring — at least it didn’t look as though anyone had come through here recently, and I definitely didn’t have any demons on my tail — and yet an uneasy chill worked its way down my back, a shiver that didn’t have much to do with the wind that had just picked up, pulling a few strands of hair loose from the messy twist I’d used to contain it earlier that morning.

It’s just because you saw this place in a vision and know what happened here, I told myself, but that didn’t help as much as I’d thought it would. Knowing that Mina Powers had died somewhere in this lonely canyon was just too unsettling.

Well, I was here now. The only thing I could do was keep going and see how all this played out.

The canyon grew narrower as I headed east, and my surroundings began to feel unfamiliar again. For a minute or two, I couldn’t quite figure that out, and then I realized Mina had been running from this place, not to it.

Trying to get away before the demon who was pursuing her could find out what she’d really been up to?

A few more minutes of walking seemed to prove that theory, because I could now tell the canyon was of the box variety as the walls narrowed and the entire thing came to an abrupt end, the sandstone walls partially obscured by some surprisingly lush pine trees and a few bare-limbed varieties that I thought might be oak.

The Penny Briggs of a few weeks ago might have been stumped by this development, but I now knew that a bare rock wall could be a lot more than it seemed. I pulled out the compass and saw it still pointed northeast, right at the terminus of the canyon.

I waited a moment, wondering if there was going to be an earth tremor like the one that had split the one outcropping apart and vomited up the box that held the key to the sword chamber, but nothing happened.

Clearly, I was supposed to get in some other way.

That key had traveled with me as well, threaded onto my key ring along with the much more prosaic ones to my rented house. I pulled the keys out of my pack and sort of brandished the magic key, hoping that might do the trick.

The rock didn’t budge, and I let out an exasperated breath.

Couldn’t Mina Powers have made this just a little bit easier?

Probably not, or the demons might have found the treasures she’d worked so hard to conceal.

Too bad I’d never been someone who played World of Warcraft or any other video games — or even Dungeons and Dragons — or maybe I would have known right away what to do to get inside the mountain. But since no one was watching, I supposed it didn’t matter if I made an utter fool of myself.

I took the key and laid it against the rock, hoping maybe physical contact would work when mere proximity hadn’t. No door yawned within the rock wall, and no earthquake came to shake some boulders loose and reveal a hidden passageway.

Scowling, I returned the key ring to my pack, then took a step back and set my hands on my hips as I glared at the blank surface. Surely this was where I was meant to be, or the compass wouldn’t have guided me here. However, having done its work, it seemed content to sit back and wait for me to figure out what to do next.

“Mina,” I said. “It’s your daughter, Penny. You’ve left something here for me, but I don’t know how to get it. Want to help a girl out?”

And then I waited.

Once again, not a damn thing happened.

This was getting ridiculous.

Feeling desperate, I went up to the rock and placed both hands flat against it, hoping that maybe it needed physical contact with someone who shared Mina’s DNA. The stone was cold against my bare skin, faintly rough, but I didn’t feel anything more than that.

What the hell was I missing?

I lifted my hands from the rock wall and rubbed them against my thighs, getting off the bit of dust and grime I’d attracted by laying them flat against the stone. For a long moment, I stood there, feeling ridiculous even though there was no one around to witness my failure.

Oddly, an image from The Lord of the Rings came swimming up in my memory, the scene where the Fellowship was trying to gain entry to the Mines of Moria. Not the sort of place you really wanted to go wandering around in, as it turned out, but the thing that stuck out in my mind was how they’d had to say a special word to get the hidden doors of the mine to open and let them in.

Was my bio-mom a Lord of the Rings fan?

What was the word Gandalf had said, anyway? Something Elvish, if I recalled correctly.

But then I had a flash of insight. Mina Powers hadn’t expected me to quote Gandalf’s lines. No, she’d left me her own charm for opening the box canyon’s hidden door.

I gathered a breath, then said,

“Ride the roan to find the patriarch’s tears.
Pour out a blessing to bury one’s fears.
As above, so below,
Circle of iron to cast down your foe.”

A low, groaning sound filled my ears, one that felt as though it had emanated from the very center of the earth.

Then a small, rounded door, nearly hidden by the juniper trees that clustered nearby, slowly opened, revealing a dark doorway that reminded me of nothing more than an open mouth. Once again, cold shivered its way down my spine, but I did my best to ignore it.

Time to go in.

Get Lost and Found at these stores (releases Wednesday, September 7th):