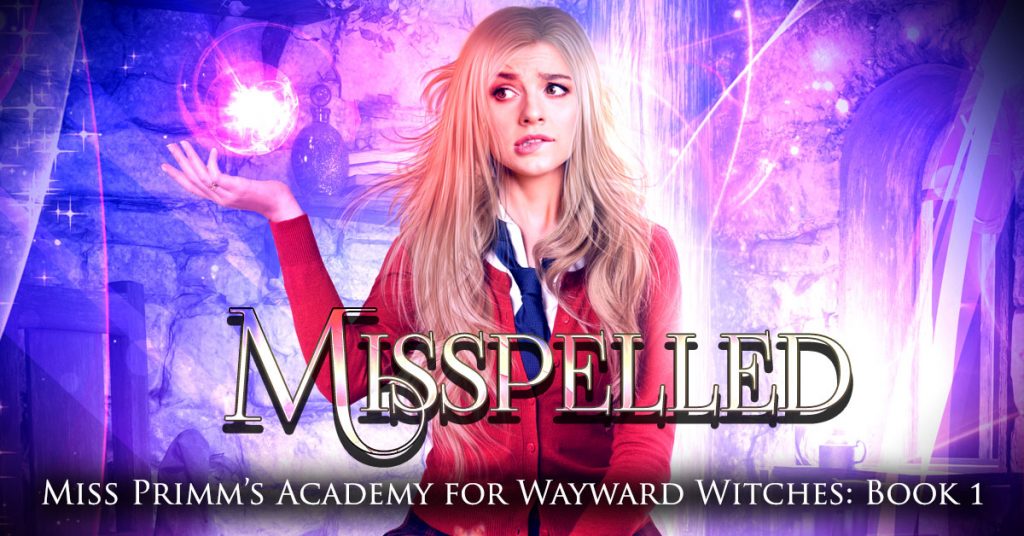 The entire Miss Primm’s Academy for Wayward Witches trilogy releases on Wednesday, November 17th, so here’s a little peek at Misspelled, Book One!

I startled, even as Juno shot me an encouraging smile. Well, easy for her to be encouraging; she’d acquitted herself very well this morning.

However, I managed to muster an answering smile before I got up from my desk and made the long walk to the front of the classroom. As I went, I couldn’t help wondering what this place had been in a former lifetime. The academy had been founded just around two centuries earlier, but the building was much older than that. Had this room once been a parlor, or a grand banquet hall? Perhaps a ballroom?

Allowing those thoughts to occupy my mind helped me reach the spot where Professor Hendricks stood without making an utter fool of myself. Once there, I paused a pace or two away and did my best to look alert and eager, and not as though I very much wished I had the power to transport myself far away from here — perhaps to a canal boat in Venice, or atop a mountain in the Swiss Alps.

Unfortunately, I didn’t possess anything near the skill to accomplish such a feat. About all I could do was stand there and hope that, whatever the professor asked of me, it wouldn’t result in my blowing out all the windows or causing the ceiling to turn into pudding.

Since Professor Hendricks was staring at me, I stammered, “C-Callie, please, ma’am.”

She didn’t respond right away, only continued to bestow that frosty glare upon me. I half expected her to tell me that nicknames were all very well and good in the privacy of our families, but Miss Primm’s was much more formal than that.

To my relief, she did not. She still held the flowerpot in her hand. “Miss Dobkins, let us see if you can manage what your classmate could not.”

Oh, dear. I didn’t think it would be a very good idea to show up Mona McGee by succeeding where she had failed, but I also didn’t see how I could possibly refuse the professor’s request.

Then again, I was rarely successful at these sorts of things, so I thought possibly I was getting ahead of myself.

Her lips thinned. No doubt, she wasn’t terribly impressed by my obvious stalling tactic. “Yes, Miss Dobkins,” she said, clearly enunciating each syllable. “A single daisy, from the seed planted in the earth within this pot. Nothing fancy — this is our first day, after all.”

I swallowed. She made it sound easy enough, but I knew better. I would have to think about that seed, consider the burgeoning life within it, and direct that energy outward so the seed would send out roots first, followed by a slender stalk to burst forth from the soil, and then at last the cheerful face of a daisy.

Well, I would just have to see what I could do. In the past, the few times when I’d actually been successful using magic, I hadn’t even truly focused on what I was doing, had simply let whatever I was trying to do happen naturally. The problem was, when I tried to duplicate those results, I began to focus, and that appeared to be a recipe for disaster.

So…how to focus without actually focusing?

A muffled gasp swept over the classroom. Yes, there was a green shoot emerging from the pot…but then there was another, and another. Writhing tendrils of vines wriggled their way out of the pot, more and more of them until the clay itself gave way, shattering in an explosion of terra-cotta shards and dark brown earth. None of the debris seemed to touch Professor Hendricks, making me think she’d thrown up a protection spell at the last minute to shield herself.

But the vines kept coming, more and more of them, winding across the floor, moving toward the desks where my classmates sat. A few frightened shrieks, and the girls in the front row hastily climbed onto their seats, trying their best to avoid the writhing mass. The vines wound themselves around the legs of the chairs, and suddenly, more and more of my classmates were up off the floor, jumping from desk to desk in an attempt to avoid getting caught by one of the rogue vines.

“Enough,” the professor pronounced. She murmured a few words under her breath, and in the next moment, all the vines I’d summoned began to shrivel and die, dwindling even as I looked. Within a moment, they had shrunk down to almost nothing, and in the next second, shivered into dust and disappeared.

I stared, wondering how on earth she’d managed such a feat.

Professor Hendricks turned toward me, her expression so neutral, I knew I was probably about to get a terrible dressing-down.

“Well,” she said, “you certainly are very strong, Miss Dobkins. We shall have to work on control, however.” And since I still stood there, not sure how I should respond, she made a whisking motion with her hands and added, “Back to your seat with you. I think you’ve done enough for one morning.”

Get Misspelled for the introductory price of just 99¢, now through the end of November!