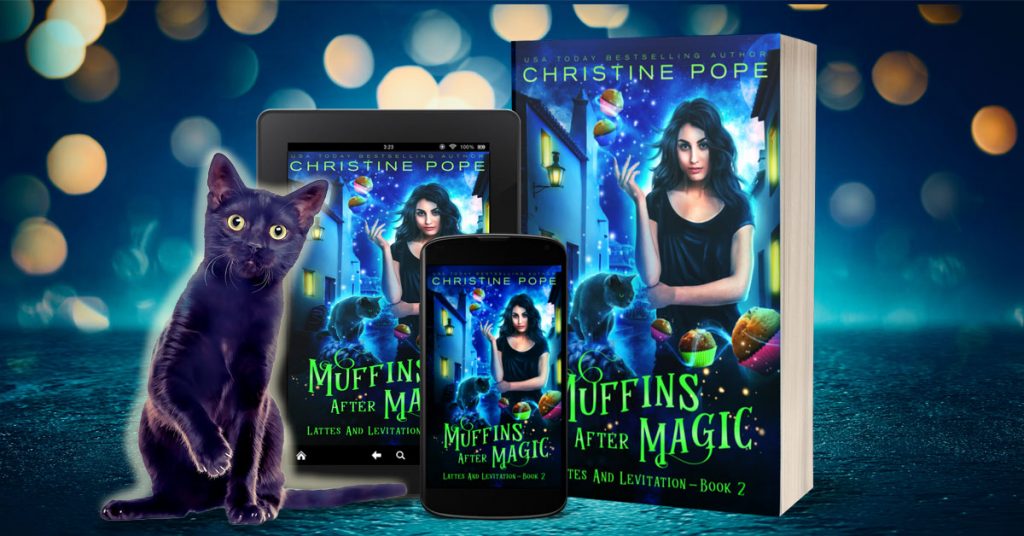 Muffins After Magic, the second book in my Lattes and Levitation cozy paranormal mystery series, is coming out on Wednesday, so here’s a peek at a scene where Skye discovers there may be more to her magical talents than she realizes.

Maybe it was time to see if I could make these so-called talents of mine a little stronger, a little more reliable. Exactly how I was supposed to do something like that, I really didn’t know, but after I’d put together a caprese salad for dinner and poured myself a glass of primitivo, I figured I’d do the same thing millions of other people did when they were trying to learn about a subject and didn’t know where they should start.

There were literally thousands of psychics and astrologers and self-proclaimed witches on the streaming platform, and I honestly had no real idea where I should even start. However, I wasn’t trying to dissect my birth chart, and I wasn’t trying to cast prosperity spells…although some of the videos on love spells were just a little too tempting.

Was it possible I could lure Max Sullivan to my side simply by sleeping with a chunk of rose quartz under my pillow, or by creating a spell jar filled with a specific set of herbs and crystals and lighting a candle next to it for a week?
Even if those methods might work…and I honestly wasn’t sure whether they would…doing something like that felt like cheating. I’d rather go my whole life with Max as only a friend and nothing more than resort to those sorts of tactics to make him fall in love with me. If he couldn’t be with me on honest terms, then better not at all.

After about forty minutes of surfing around, I finally landed on someone who sounded as though she might be able to help me. True, she called herself “Madame Wanda,” and she wore so many scarves and amulets that it was hard to tell where they left off and her plump figure began, but at least she seemed focused on developing a person’s inner powers rather than casting love spells or telling me why my Jupiter in Sagittarius should make me more fearless than I actually was.

Also, some of those YouTube witches were a little intimidating. They had perfectly made-up faces and expertly styled hair, and looked as though they’d just gotten dressed for their latest batch of Instagram selfies rather than offering any sort of practical magic advice.

Practical magic. Right. There was absolutely nothing practical about what I was attempting to do.

But I reassured myself that I did have some small kind of talent. Otherwise, my tea leaf readings wouldn’t be so accurate, and I wouldn’t have dreams that often came true. Maybe it was a huge leap from those quiet sorts of magic to actually casting spells or whatever, but I knew I needed to try. It was entirely possible that I’d never be anything more than someone who ran a coffee shop in an out-of-the-way town in northern New Mexico, and yet…

…and yet, I knew I’d kick myself from now to the end of time if I didn’t see whether I was capable of doing anything more than that.

“Find a way to center yourself,” Madame Wanda intoned, and I paused the video so I could gulp down the remnants of my primitivo and then take my empty glass and plate into the kitchen. After stowing them in the dishwasher, I returned to the dining room table, where my laptop waited for me. I’d paused at an unfortunate moment, with Madame Wanda’s fuchsia-lipsticked mouth open in a wide “O,” so I hurriedly unpaused the video so I wouldn’t start giggling and lose what little bit of concentration I’d managed to scrape together.

Since Madame Wanda herself was sitting on a chair as overstuffed as she was, I guessed it was okay for me to be seated on a dining room chair rather than on the floor in a lotus position or whatever. I sat upright, hands resting on my knees, and drew in a breath.

“Focus is everything,” she went on. “Reach inside yourself to find the spark of your magic. It lives deep within, but will come forth when called. Imagine it like a warm glow surrounding you, infusing every cell in your body. This is the vital force, your chi, your mana. Let it come forth and do your bidding.”

The urge to giggle was almost irresistible — did she really think people would buy this stuff? — but I told myself I needed to focus, to be as serious as possible. Otherwise, I should have blown off Max’s comments, gone into the living room, and put my feet up on the couch so I could watch TV before going to bed at my usual weekday nine o’clock.

Whatever either of those things was.

Strangely, though, I thought I felt something stirring deep inside. An odd warmth began to flood through my midsection, flowing out to my fingertips, just as Madame Wanda had described.

What the heck? Was this stuff…real?

I blinked and opened my eyes. The video was paused again, even though I knew I hadn’t reached over to touch my laptop’s keys.

But that wasn’t the strangest thing.

No, that would be the weird sparkly stuff flowing out of my fingertips and wrapping itself around me in a glowing cocoon.

I gasped and stood up so quickly that the chair fell over and hit the floor with a bang. At once, the shimmering gold tendrils that had emerged from my fingers disappeared as if they had never been there at all.

Maybe I shouldn’t have had that glass of wine.

No, I wasn’t drunk, or anything close to it. Whatever I’d just seen, it had been real.

Which meant that maybe I could summon it again.

I closed my eyes and breathed in and out, concentrating on the core of my being, visualizing that odd golden glow. A warmth that wrapped itself around my hands and arms told me it was happening again.

Cautiously, I cracked an eyelid. Yes, there it was, all shimmering and filled with dancing light, like animated glitter. This stuff, however, wouldn’t leave an unholy mess everywhere like the real thing.

Because this wasn’t glitter.

Get Muffins After Magic at these online retailers: