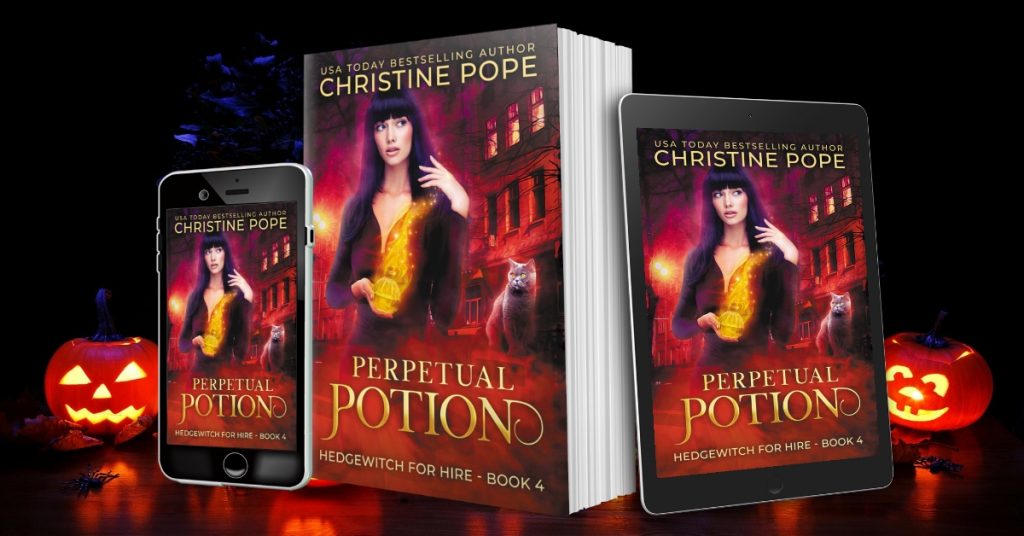 Perpetual Potion, the fourth book in my Hedgewitch for Hire series, will be out this Wednesday (the links to pre-order the book are listed below the excerpt), so here’s a look at a scene from a Halloween party that ends in an entirely unexpected way!

Terry smiled and thanked me, and said she’d find Danny and send him over. I managed to smile and tell her that would be great, although inwardly, I couldn’t help hoping she wouldn’t be able to find him, or that maybe he’d left the party early, although I knew that particular scenario was a bit of a stretch. I’d probably only exchanged twenty words with the guy, but it was enough to tell me Danny Ortega wasn’t the sort of person to ever bail out on a party before it was over.

Sure enough, he came striding up to my table a couple of minutes later.

Why was I not surprised he’d dressed up as Zorro, complete with flat-brimmed black hat, black cape, and a black shirt that was a little too open down the front, revealing more dark chest hair than I really needed to see?

However, I made sure I sounded crisp and professional as I said, “Hi, Danny. Are you ready for your reading?”

“Absolutely,” he replied as he sat down with a completely unnecessary flourish of his cape.

Holding back a sigh, I started to shuffle my cards…and shuffle them. For some reason, I wasn’t getting the inner ping or vibe or whatever you wanted to call it that told me it was time to stop messing with them. “What do you want to focus on tonight?” I asked him.

For a second, his gaze slid toward the faint hint of cleavage the scooped neckline of my dress revealed, and I had to clench my teeth and force myself not to kick him in the shin under the table.

Violence is never the way, Selena.

He grinned, apparently oblivious to my annoyance. “Oh, I don’t need anything fancy. Just let me know what to expect in the near future.”

Great. I hated open-ended readings like that. The cards worked so much better when the querent had some kind of clear intention in mind.

But if that was what he wanted….

I shuffled the deck some more, then decided the hell with it. The worst that could happen was I’d get a jumble of mismatched minor arcana and court cards, and I’d have to do my best to cobble together a story that connected them and made their sequence somewhat plausible.

One card was sticking out slightly, so I pulled it loose and laid it down face up.

The Devil stared up at me, eyes squinted into a leer as he leaned over two children, tempting them with ice cream. The Everyday Witch deck had probably the most benevolent-looking Devil card out there, but the artwork couldn’t change its meaning.

Before Danny could comment, I pulled out another card.

Ten of Swords. Seriously? I tried not to stare too hard at the image on the card stock, of a witch lying face down on the ground with ten swords sticking out of her back. The card always signified some kind of calamity approaching, although some practitioners tried to soften the message by saying it also could mean a person merely needed to be on their guard against treachery or betrayal.

I laid down the Death card and tried not to sigh. And all right, its usual meaning wasn’t literal death, but some kind of major transformation and change. Even so, it generally wasn’t seen as something you wanted to have turn up in a reading.

Danny Ortega stared at me, expression expectant. “So…?” he said, since I’d remained silent, inwardly trying to come up with a reading from such a calamitous collection of cards that wasn’t all doom and gloom.

“Um….” I said. I pulled in a breath, and reminded myself this wasn’t the first time I’d gotten a card pull that looked completely catastrophic. In all those cases, my clients had come out just fine in the end. Maybe they’d suffered a divorce or lost a job, but those calamities had turned out to be blessings in disguise.

“Is it bad?” Danny asked, head tilted slightly as he stared down at the cards.

Sometimes I was still astonished by how clueless people could be about the Tarot. All right, it wasn’t that I expected everyone to be an expert or something, but at the same time, the deck and the images it contained were a big enough part of popular culture that you’d think a detail or two might have sunk in.

Then again, in this instance, that could be a good thing.

“I don’t really like to be as absolute as ‘good and bad’ when I’m doing a Tarot reading,” I told Danny. “However, it does look as though there are some big changes coming for you, changes you might not be expecting. I would say to be on guard and not do anything that might cause someone to have a grudge against you.”

One dark eyebrow lifted, and his mouth pursed slightly. It seemed clear enough that he wasn’t too happy about the reading, even though I’d soft-pedaled the heck out of it.

“Anything else?” he asked.

“No,” I said, glad I still sounded calm and unruffled. “These are short three-card readings. They’re intended to give you a general sense of something, not provide a step-by-step guide. I’m just seeing the need for caution.”

For a moment, he didn’t respond. Then he shot me a white-toothed smile I didn’t buy for a second, and got up from his chair. “Well, thanks, Selena. This has been…educational.”

And after he flashed another glance at my cleavage, he headed off toward the dining room, presumably in search of a drink.

The Goddess only knew I needed one as well after that particular reading.

PRE-ORDER PERPETUAL POTION AT THESE STORES: