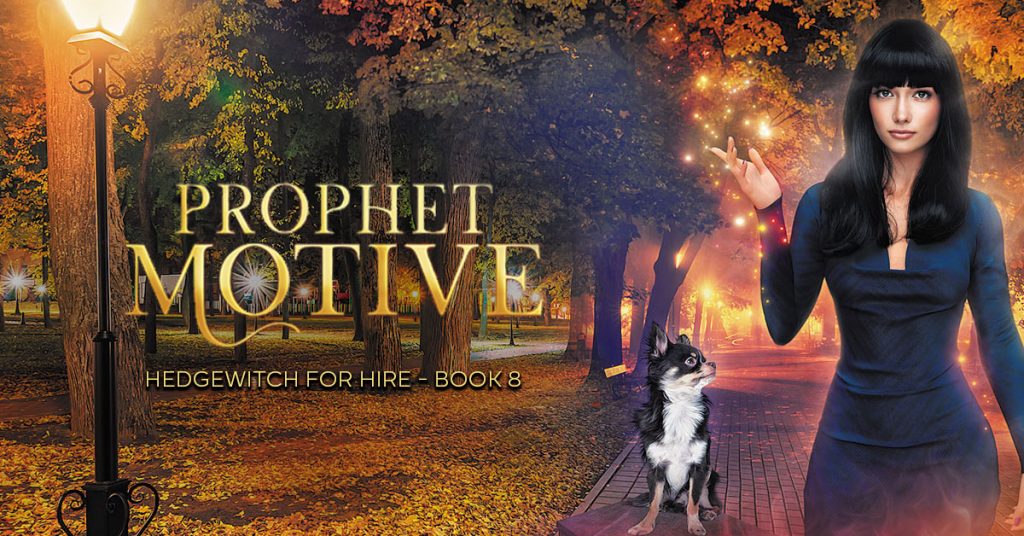 We’re getting close! Prophet Motive, Book 8 in the Hedgewitch for Hire series, will be here on Wednesday, November 16th! To get a little sneak peek, keep reading. 🙂

Usually, performing a Tarot spread helped to relax me. I would hold a single question in my mind and open myself to the energies of the universe, then see what came of it.

In this particular case, though, I thought I probably should have left my Everyday Witch cards in their little velvet bag, poured myself a glass of wine, and called it a day.

Because when I’d pulled three cards to give me an indication of how the Life Springs Church visit in Globe was going to go, I’d pulled the Devil, the Tower, and my personal favorite, the Ten of Swords, the oh-so-lovely one with the poor witch lying face down on the ground with ten blades sticking out of her back.

It seemed the universe wasn’t too pleased about the prospect of Pastor Galloway spreading his particular gospel in my adopted hometown.

As soon as the thought crossed my mind, I did my best to push it away. While this trio of cards looked calamitous on the surface, it didn’t necessarily have anything to do with what Aaron Galloway preached in his sermons. I shouldn’t be projecting my own biases on something that didn’t directly affect me.

No, I needed to look at this logically.

The general meaning of the Devil card was of temptation, and also of clinging to attitudes or beliefs or behaviors that could be damaging to an individual. In this case, I honestly didn’t know who might be holding on to elements in their life that might hurt them in the end. Pastor Galloway himself, or someone in his circle?

Maybe Chelsea Haven? I had to admit that on the surface, she certainly didn’t look like someone who was wrestling with her inner demons. She was probably six or seven years older than I, and so in her late thirties, and had been dressed simply but attractively in a skirt suit and low-heeled shoes that wouldn’t have slowed her down too much while performing her supervising duties at the park. Yes, I could tell she didn’t much care for me or what I represented, but that didn’t mean a whole heck of a lot. It’s not as though it was the first time I’d encountered someone who inwardly thought I was going straight to hell.

And I also knew it wouldn’t be the last.

I reminded myself that Aaron Galloway must have plenty of people working for him and that I shouldn’t focus on Chelsea Haven just because she was the only one of them — besides the man himself, of course — that I’d met so far. Also, while the question had been centered on how the event would do, it didn’t necessarily mean the universe was pointing me toward someone directly connected to Life Springs Church. Maybe this horrible outcome involved one of Globe’s citizens instead.

That notion wasn’t very appealing. Not that I was the type to wish ill on anyone, but if some calamity was going to befall an unsuspecting victim this weekend, I’d much rather it was a complete stranger rather than someone I knew and cared about.

The Tower seemed to indicate something was going to happen to shake up the status quo. Contrary to popular belief, it wasn’t a completely negative card, as sometimes you needed your world to fall to ashes before you could begin to rebuild. Still, its presence in this reading told me something major was looming on the horizon, like monsoon clouds just beginning to build as the heat of the afternoon rose.

And as for the Ten of Swords, it also tended to signal that something less than desirable was bearing down on you with the speed of a freight train. In cases like that, about all you could do was brace for the worst…and know you still had the strength somewhere deep within to help you get back on your feet, brush yourself off, and keep moving forward.

Brace for the worst….

I stood there and stared down at the cards on the table in my office for a long moment. Usually, I loved this place, loved the way the afternoon sunlight slanted past the cottonwoods that lined a dry creek only yards away from the house, loved the feeling of peace I experienced whenever I entered the space. This room was bigger than the one I’d used for an office back at the apartment, and so Calvin had helped me set up more bookshelves on the wall opposite my altar and the shelving units that flanked it, bookshelves filled with crystals and plants and little trinkets and objets d’art…and books, of course, as many as I could fit amongst all the other items.

At the moment, though, I couldn’t ignore the unease churning in my stomach. I wished Calvin wasn’t at work so I could talk over the spread with him and have him reassure me that it wasn’t as bad as it looked. No, I wasn’t afraid of being in the house alone, but I also couldn’t ignore how big and empty it felt.

That glass of wine was sounding better and better….

GET PROPHET MOTIVE FOR THE INTRODUCTORY PRICE OF JUST $2.99 AT THESE STORES: