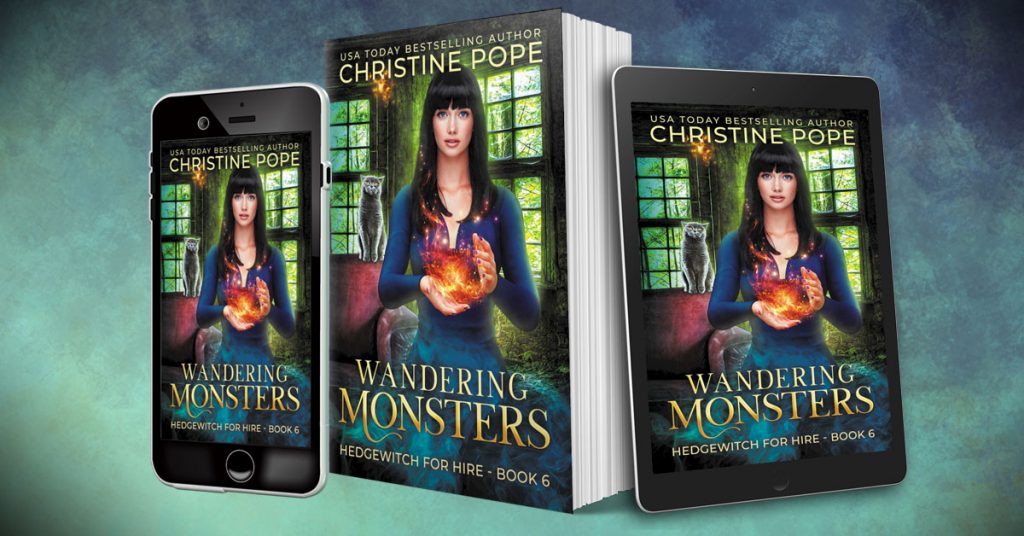 Wandering Monsters is coming your way on Wednesday, March 9th, and so now it’s time for a little peek! In this scene, Selena and Calvin have a not-so-friendly encounter with the star of Monster Hunt, a reality TV show that’s filming nearby.

The evening wore on, and the margaritas and beer and sangria flowed. I knew I was feeling just a bit tipsy, even though I’d done my best to pace myself, making sure my margaritas were well spaced with lots of water and plenty of food. Still, I could tell I was a little unsteadier than I would have liked.

Good thing Calvin and I were walking back to my apartment.

Just when I was trying to think of a graceful way to excuse the two of us so we could get out of there — the crew was trading in-jokes and laughing about people and situations none of us locals could possibly know about — Dillon came up to me. I’d been left briefly alone so Calvin could use the bathroom, and I had to wonder if Dillon had been waiting for that exact opportunity so he could pounce.

“Having fun?” he inquired.

“Oh, yes,” I replied, hoping I sounded enthusiastic enough that he wouldn’t think I was lying, but not so enthusiastic that he’d see my response as an invitation to coax me into staying longer. “It’s been a great party,” I added. “Thank you for inviting us.”

“Well, I invited you,” he returned. “I wasn’t too thrilled to see you’d dragged the great stone face along with you.”

Okay, Calvin could be a bit impassive at times, but I thought Dillon’s derogative description was something of a stretch. Voice level, I said, “Josie told me it was fine to bring Calvin along.”

“Joined at the hip, are you?” Dillon said. “He doesn’t look like much fun to me.”

“I assure you, he is,” I replied. Then I gathered myself. I really didn’t want to get into an argument in front of everyone, and besides, there was absolutely no reason why I should have to defend my fiancé to a drunk reality show host.

Dillon put his hand on my arm. “I could show you a good time,” he said, hazel eyes glinting lasciviously as he stared down at the V-neckline of the wrap top I was wearing.

“Everything okay here?” Calvin broke in. As usual, his voice was calm, but I could see the way his eyes narrowed and the muscles in his jaw tightened ominously.

“It’s fine,” I said, and yanked my arm from Dillon’s grasp. “I was just thanking Mr. James for the party and telling him we needed to get going.”

This prevarication didn’t seem to sit too well with our unwelcome companion, because he said, “No, actually, I was trying to get Selena here to realize she’s wasting herself with a small-timer like you.”

Dillon spoke those words loudly enough that they carried to every corner of the room. Josie’s eyes widened, and I saw Mayor Ridgefield and his wife exchange a worried glance.

Thad Sullivan, on the other hand, looked furious. He bent and whispered something to Courtney Beach, who’d been standing next to him, and she hurried over.

“Time to go,” she said brightly, her gaze carefully not meeting mine…or her boss’s. “Thad says we all need to get our beauty sleep since we’ll be heading out early Monday morning.”

Which didn’t make a lot of sense, since they had all of Sunday to rest up and get ready for the next week’s shooting. However, I knew Thad was only trying to break up the tense little scene. Most likely, he didn’t want our squabble ending up on TMZ or in the National Enquirer.

Dillon’s mouth opened, and he growled, “When I’m ready.”

That seemed to be a signal for his producer to intervene directly, because Thad came over then, a tight, utterly unconvincing smile on his thin lips. “You know we need to go over those show notes early tomorrow, Dillon,” he said. “I think it’s time to pack it in.” His tone was pleasant enough, but the sideways glance he sent in my direction seemed to indicate he thought this was all my fault.

I found myself bristling but knew I couldn’t react. The last thing I wanted was to draw out this confrontation. Instead, I made sure my gaze didn’t meet anyone’s directly…not even Calvin’s.

All the same, I couldn’t quite miss the way my fiancé’s hands clenched, as though he was doing everything he could to keep himself from reaching out and giving Dillon a solid punch in the nose.

Apparently, the tense vibes radiating from the two of us managed to penetrate the reality host’s tequila-addled brain, because he shifted his weight and muttered, “Fine. I’m done with this dive anyway.”

He turned away from Calvin and me, ignoring Thad Sullivan completely, and stalked out of the restaurant. A skinny guy who barely looked old enough to drink hurried after him, a key fob already in one hand. Dillon’s driver, I assumed, which could only be a good thing. The man might have been on the verge of causing a horrible scene, but it was pretty obvious to me that he was drunk and most likely didn’t know what he was doing.

The party deflated after that — or at least, I saw people already moving to gather up their jackets and bags as Calvin and I left the restaurant. For the first block, he didn’t say anything, and I let him be. I knew when he got like that it was better to wait it out.

In fact, he remained silent the whole walk back to the apartment. After we got in, I shot a surreptitious glance around but didn’t see Archie anywhere. It wasn’t all that late, but I guessed he’d already retired to his bed in the office.

“Just who the hell does he think he is?” Calvin burst out at last.

I knew he wasn’t talking about Archie.

Calvin nodded, then looked almost sheepish. “Sorry about that,” he said. “But when I saw that guy’s hand on your arm — ”

Although in general I didn’t have much use for territorial males, something about Calvin’s over-protectiveness in this particular instance was oddly endearing. “It’s fine,” I said, and wrapped my arms around his waist. “He was acting like a complete jerk. But it looked like Thad Sullivan shot him down before things could get really bad.”

“True.” Calvin ran a hand over his chin. Thanks to his Native American heritage, he never got very stubbly. “It does seem like Sullivan keeps him on a pretty short leash.”

And I had to be grateful to the universe for that. After all, it was never a good thing to piss off the person who held the purse strings.

“Absolutely,” I agreed. “Anyway, this will all blow over soon enough. The shop’s closed tomorrow, so I don’t have to worry about dealing with any of the Monster Hunt gang, and they’ll all be back in Whiteriver early Monday and then out of our hair altogether by the end of the week.”

Calvin nodded, although he still seemed a little troubled. “If you’re sure — ”

“I am sure,” I said firmly. Then I went up on my tiptoes and gave him a hearty kiss to prove he hadn’t done anything wrong. Really, his reaction to Dillon’s grabbiness had been pretty measured. Some guys probably would have socked the reality TV host right in the jaw. “But I’m also annoyed that you can’t stay over tonight.”

Looking resigned, he replied, “Me too. But tomorrow’s my Sunday in the rotation, and I don’t want to wake you up just because I have to get rolling at the crack of dawn.”

Those words made me wonder what it would be like when we were actually living together, when we’d be sharing a bed all the time. Then again, even if he woke me up when he had one of those early shifts, I could always go back to sleep. Besides, once we were living at his house, he’d be a lot closer to the San Ramon tribal police station than he was when he stayed over at my apartment. Shaving off that piece of the commute would save him a good fifteen minutes.

So we hugged and kissed some more, and then I walked him down the stairs and watched as he climbed into his big white Durango and drove off. He’d been very careful at the party and had only consumed a single margarita, so I knew he was fine to get behind the wheel.

Despite that inner reassurance, I experienced an odd trickle of dread as his SUV went around a corner and he disappeared from view.

He’ll be fine, I told myself, and went back inside.

All the same, I lit the protection candle on my nightstand and uttered a silent prayer to the universe that no harm would come to the man I loved.

A small thing, but I hoped it would be enough.

Get Wandering Monsters for the special pre-order price of just  $2.99!