Sample Sunday - Wish Upon a Star 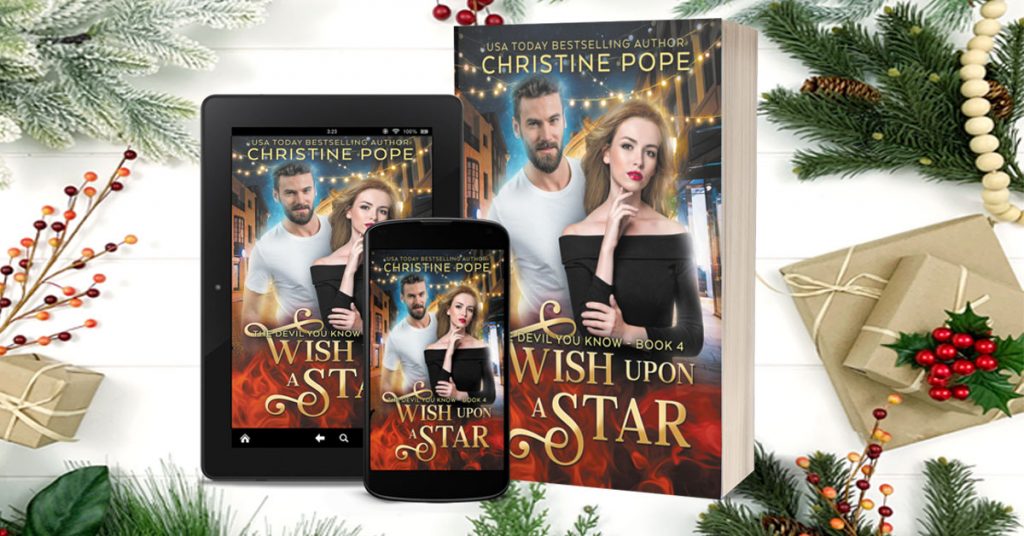 Wish Upon a Star, the final book in the Devil You Know quartet, comes out on Wednesday, so that means it’s time to take a little peek inside! This teaser includes a look inside former demon Belial’s mind as he contemplates meeting our heroine, Callie Donaldson, for the first time.

He really hadn’t expected her to be so beautiful…and so young. Callie Donaldson’s assistant had mentioned an eleven-year-old daughter, and so he’d imagined his new employer as someone maybe in her early forties, a typical Beverly Hills divorcée with highlights and a little too much Botox.

Nothing could have been further from the truth. Very put together, of course, from the perfectly cut black dress she’d been wearing to the three-inch heels on her slender feet, but with minimal makeup, just mascara and glossy red lips that had made him want to stare at her mouth. Her big dark eyes were a contrast to her honey-blonde hair, but he guessed her coloring must be natural, since he hadn’t detected any noticeable roots.

Somehow, he’d managed to resist the impulse to goggle at this vision, had told himself to be cool and professional. That task had been made a little easier by the realization that even though Callie’s former contractor had left her high and dry, the work Harry Silva and his crew had done was top-notch, and Belial’s worries about discovering a thousand little mistakes he would have to fix seemed to have been for nothing.

All the same, he couldn’t let himself be entirely easy about the project that lay ahead of him. The work itself shouldn’t be too difficult, and yet….

And yet, he had to hope he could manage to be his usual casual self around Callie Donaldson. In general, he wasn’t the type to let himself get too worked up about a woman…his earthly liaisons had been laid-back in the extreme…but he also had to admit that the girls he’d hooked up with so far were an order of magnitude different from the woman he’d met in the framed-out shell of what would soon be a state-of-the-art kitchen.

How had someone her age gotten to a place in life where she could afford a remodel with a budget somewhere north of half a million dollars, let alone the house itself? It was older, true, but it sat on a large lot on a very desirable street, and was definitely worth millions.

Belial hadn’t bothered to look up anything about Callie before their meeting, mostly because he didn’t see any reason to pry into a client’s private life. Their relationship should have been purely transactional — he offered a service she required, and that should have been the end of it.

He went into the bedroom he used as an office, and where his laptop sat on a table. No point in having a real desk when he didn’t spend a lot of time on his computer; he rolled over a chair that had been sitting in a corner, opened the laptop, and did a quick search. It didn’t take long to find what he was looking for.

Well, no wonder Callie Donaldson didn’t seem to be lacking in ready cash. She was the designer and owner of Mack Sellers, a fashion line that looked as though it was offered in a bunch of the types of high-end department stores where maybe Asmodeus and Lucifer might shop, but definitely not the kind of places that sold the Levi’s, T-shirts, and board shorts Belial had adopted as his everyday attire.

And there was an article saying Callie was launching a new couture line based on free trade and sustainably sourced fabrics and embellishments, one that would be sold at Bellman’s in New York starting in the spring.

She hadn’t said as much, but Belial had to guess that the all-important “function” at her house had to do with the launch of her couture line. And while he honestly didn’t see what the big deal was about clothing — to him, it had to be functional and wear well, and that was about it — he could tell this party meant a great deal to her.

No wonder she’d panicked when Harry Silva bailed out on her, and had her assistant immediately make some phone calls. Callie Donaldson definitely needed a knight in shining armor to salvage her holiday gathering.

And if said “knight” actually turned out to be a former demon with a knack for hanging drywall?

Belial thought he’d be okay with that.

GET WISH UPON A STAR AT THESE STORES: